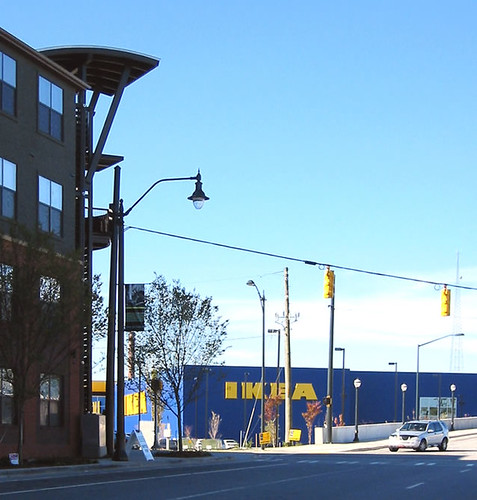 Ikea is in the midst of a complete rethink of their US store strategy, rapidly announcing the cancellation of multiple superstores that were due to open in 2020: in my hometown of Cary, N.C., outside Nashville, west of Phoenix, and Fort Worth. Other stores set to open in 2020 could also be canceled, affecting plans in northwest Denver, the East Bay, and northwest of Atlanta. Stores already under construction, like one in Norfolk, are proceeding as planned.

As Ikea branched out from America’s top-20 metro areas (median population ~5 million) to the top-40 metro areas (reaching some with populations below 1.5 million), it doubled its store footprint — but now each new-build store addressed fewer than half as many potential customers. Some of the mid-sized cities draw from large hinterlands and can easily support full-sized stores, like Salt Lake City or Jacksonville… but many blur into Ikea-served regions nearby: Hartford, Providence, Tulsa, Richmond, Raleigh, or Buffalo and Rochester (near Toronto). Even within the megacities, customers on the far side of town, or downtown, don’t want to carve out an entire day to drive all the way across town to wait in long lines and stress-eat meatballs.

Much has been written, albeit with few details, about Ikea opening shops in city centers. A look at their small shops in the UK and Canada indicate that they’re primarily using these new compact store formats to reach smaller metro areas, not necessarily “alpha” global cities, and to fit into strip malls where people are already shopping.

A quick review of the five US-drugstore-sized “IKEA order and collection points” in the UK & Ireland turns up:

Canada’s six “IKEA Pick-up and order points” are up to twice as large — about the size of a small supermarket, from a Fresh Market on the small end (20,000 sq ft) to a Whole Foods Market on the large end (40,000 sq ft). They are all located in suburban locations, outside smaller cities in Ontario and Quebec. Around Toronto, for instance, are a series of smaller satellite cities — close enough that people could drive to the city for Ikea, but in practice rarely do. The biggest city, Hamilton, has a full Ikea, but what do with the smaller ones? Now that the PUP exists, every city can have a conveniently sited Ikea. For instance, Ontario’s Tri-Cities, a collection of college towns (Kitchener, Cambridge, Waterloo) about 60 miles outside Toronto, with a regional population of about 500,000. There, IKEA located in a Costco-anchored strip mall in the center of the region — well away from the area’s universities. All of the six PUPs are adjacent to either Costco, Home Depot, or the like; five are in power centers, and one in an enclosed mall (although untraditionally anchored by Walmart).

The “Pick-up and order points” (PUPs) address many of the potential customer segments that its previous superstore strategy missed. Since they’re 90% smaller than full-sized stores, they can easily branch out into smaller metro areas, or fill in around megacities. As a bonus, they can go into existing spaces, for faster and cheaper build-outs, and can go into first-tier locations rather than being shunted to second-tier sites which happen to have room. Several have even backfilled existing dark big boxes — e.g., Birmingham was a Toys ‘R’ Us.

Two of the cancelled locations, in Cary and Nashville, were being planned as part of turnaround plans for dying malls. Those locations contrast sharply with the first wave of Ikea USA locations, which were often right outside fortress malls. Future PUPs will likely be in well-trafficked power centers, close to fortress malls, and are a terrific opportunity for landlords like Kimco or DDR.

2020 update: IKEA Canada has closed all PUPs; it’s replaced those with outsourced “collection points” where trucks drop off the day’s orders at a 3PL‘s warehouse, with no on-site shopping. It’s continuing to open mini-stores in central cities. In an interesting twist, Ikea’s captive shopping center developer (a la Sears & Homart) Ingka Centres has announced it’s shopping for adaptive-reuse opportunities in US gateway market CBDs, beginning with repositioning a newly built, but already failed vertical mall in SF’s Mid-Market.

One thought on “Coming soon to a power center near you: Ikea?”