Is it really that much more miserable outside in July? Why yes, it is. Here’s a graph of the monthly average, high, and low dew points at DCA.*

Ask people who don’t like hot, humid weather, and they’ll tell you that the weather measurement they rely on most is dew point.

“I think it’s catching on,” said meteorologist Paul Douglas. “It a superior way to, at a glance, determine what it really feels like out there.” Bill McAuliffe, Star-Tribune

I’m among those dew point fans. It, not the temperature or the heat index, best describes how it feels to be bicycling here. A hot and somewhat humid day may have a dew point of 70, identical to a cooler and off/on rainy day (of the sort we’ve had a lot of lately), but the net result is still getting drenched in sweat. My guideline for how I’ll feel when stopped (at lights, after riding):
<50 = no sweat, wear regular clothing
60 = nice, maybe change clothes at work
65 = acceptable but pushing it, go slow or get damp
70 = gross with sweat, definitely change shirt frequently
75 = I’d rather it rain, because either way I’m drenched
80 = instant dripping upon setting foot outside, tough to breathe
85 = kill me now, for surely Hades must be cooler than this 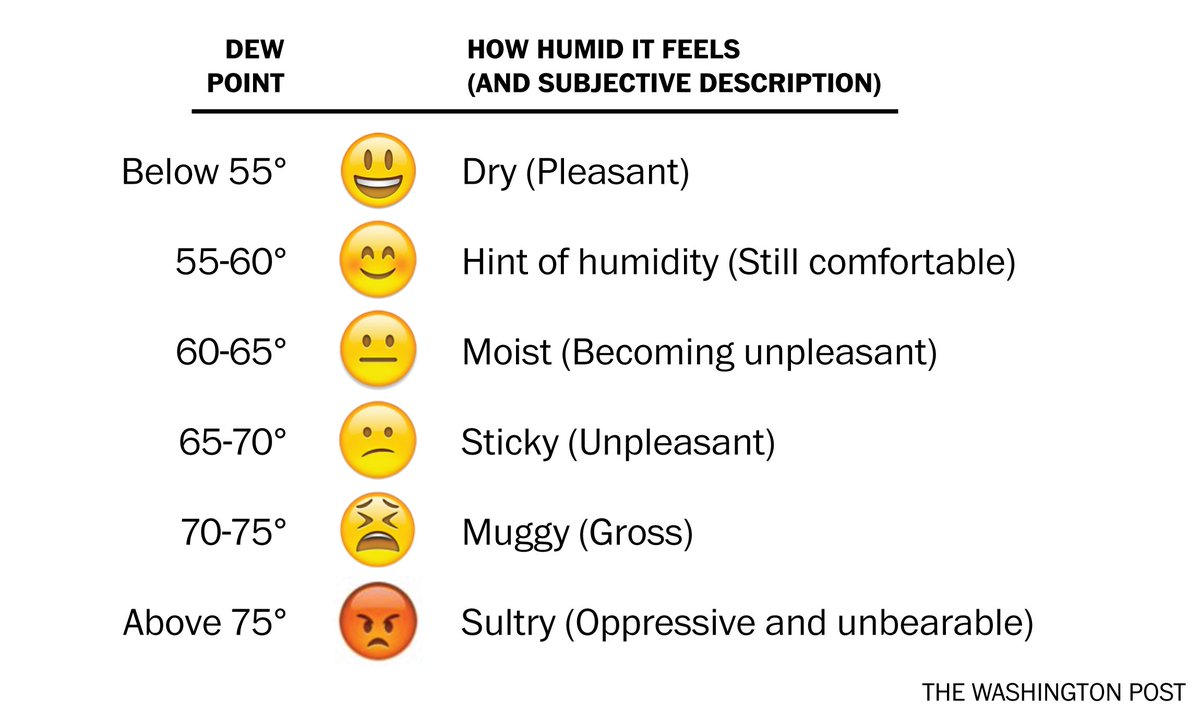 The article gives a good analogy: the dew point is the lowest temperature that it’s possible for sweat to cool your skin down to. I get uncomfortable at 70 and cranky at 80, and that corresponds nicely with the dewpoint guidance above.

The world’s highest dew points are around the Persian Gulf; high temps evaporate a lot of seawater into the air. The Plains and the South get high humidity mostly from plant transpiration.

Being able to ride outdoors without turning into a sweaty mess turns out to be a key determinant of cycling levels: at least one article (Jillian Strauss & Luis Miranda-Moreno, “Spatial modeling of bicycle activity at signalized intersections“) finds that humidity, then precipitation, then temperature determine cycling levels, even in cool Montreal.

This sensitivity to humidity might give pause to bike advocates in the eastern US before taking fashion advice from parts of the world which have very different climates.

In particular, European criticisms of how Americans dress while cycling ignore the reality of our humidity. The average August dew point in Amsterdam? 58F (average monthly temperature is 64F). Their most humid August ever had a dew point of 72F, just above the *normal* dew point here. Of course they dress normally: they can. I spent several days biking around Paris during the catastrophic August 2003 heat wave; it was hot, with temperatures around 100F, but dew points were around 60F. That’s actually kinda nice weather by D.C. standards.

Closer to home, the outdoors/activewear industry is overwhelmingly clustered in the West, which has much more courteous weather than the East or the South. Thus, “soft shell” outerwear appropriate for Cascadian drizzle leaves me drenched within minutes of venturing out into a thundershower, messenger bags pool up back sweat whereas back-saving panniers are hard to find, and everything’s much too casual for a city filled with dark suits.

Most of humanity lives in the tropics, not in balmy Mediterranean or chilly North Sea climates, and it’s about time that fashion recognized that fact. Maybe we should instead take fashion cues from other humid places instead; Japan, Korea, and northern China share both their latitude and westerly continental jet stream with the Northeast and Midwest.

* Bear in mind that these are for entire months, days and nights, and that the high/low numbers are still averaged out over the course of an entire month, so individual days will certainly differ substantially. Also, to the extent that the region has microclimates, DCA probably has the highest dewpoints of the local airports with its low elevation, river frontage, and relatively high urban heat island exposure. Upland areas might be slightly more bearable. 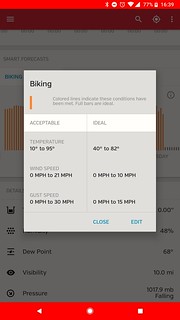 2019 update: WeatherSpark has colorful graphs of dew points through the year for all US weather reporting stations. One in three late-July days at DCA has “oppressive” humidity. Take the Cardinal up into the Appalachians and it melts away; in Staunton, it’s only one in six, and at White Sulphur Springs it’s about one in twenty. 4 thoughts on “Dewpoints in DC over the year”