Earlier this year, I wrote about some new materials and techniques that could make structural engineering for mid-rise buildings easier, faster, and cheaper. If widely implemented, these could make human-scaled mid-rises more affordable, more widespread, and frankly better looking. 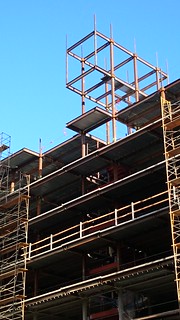 Steel makes elements like this penthouse easier to build. (Alas, the exterior’s been toned down from this glassy early rendering.)

1. While I was in California, I saw two examples of steel-framed mid-rise buildings constructed using ConXTech, an Erector Set-like approach to steel frames that promises to save time and money through computer-aided prefabrication. Eddie Kim writes in the LA Downtown News that the Eighth & Grand grocery + apartment building, “There’s no army of welders diligently fusing each joint and beam. Instead, steel girders are being lowered and snapped into place.”

Dan Garibaldi from developer Carmel Partners told Kim that the technique cut costs some, but really saved time and added design flexibility, particularly crucial in a mixed-use project: “We contracted for the steel at a beneficial time so the cost differential is not nearly what it would be today… The main benefit is how quickly we can complete the framing. In addition, ConXtech allowed us [to build] an additional residential floor and create long spans that are not easily achievable in wood frame.”

ConXTech co-founder Robert Simmons expressly invented the system to compete with Type III-over-I construction. He told Kim, “we were looking at ways to create a competitive method of structural framing versus wood and I couldn’t do it with concrete, so I started looking at steel.” His firm worked on the concrete retail podium at Santana Row in San Jose, which suffered a massive construction fire — not unlike recent fires that destroyed under-construction, pre-fireproofed Type III buildings in Mission Bay and on Bunker Hill. 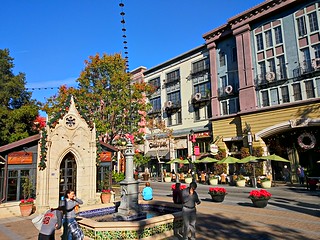 Not Type III over I.

Santana Row’s upper-story apartments (and hotel) were rebuilt using ConXTech steel, and there are palpable differences between it and, say, Rockville Town Center (another Federal Realty development, built as conventional III-over-I), notably more generous window openings and a subtler transition above the podium. At Santana, the base of the building often extends above the second floor, allowing not just for retail mezzanines but also adding vertical articulation.

2. Cross-laminated timber is a particularly exciting new technology for D.C. buildings: under current building codes, it can reach up to 90′ high — the height limit outside of downtown — and uses wood, which is locally available, easy to work with (i.e., fast and inexpensive), and has a comparatively small carbon footprint. Plus, it can look like the old timber lofts of yesteryear, a building type I’ve long been fascinated with.

Architect Michael Green’s Wood Innovation and Design Centre in Prince George, B.C. was recently completed; it reaches 90′ with its eight stories — or, technically, five stories and a penthouse over a one-story podium with a mezzanine, a bit of creative accounting perhaps done to satisfy code requirements. But whatever, Prince George might as well be on the moon, since it’s 500km from even Edmonton or Vancouver.

A heavy timber loft for the 21st century, built with rapidly renewable materials.

What’s more notable is this seven-story speculative office building that fits right into downtown Minneapolis’ loft district, designed by Green and developed by office titan Hines. Sam Black writes in the Business Journal, “Unlike Warehouse District buildings such Butler Square and Ford Center that were built out of huge logs, modern timber buildings use wood engineered from several layers of younger trees.

Today’s office tenants disdain boring concrete high-rises, and even the new-construction concrete “lofts” that began popping up in the 2000s are a weak alternative. CLT offers architects a chance to build an authentic timber loft building, from scratch, and without harming old-growth trees. Bob Pfefferle from Hines told Kristen Leigh Painter of the Star-Tribune, “it provides an authentic building that is respectful of the neighborhood. This will have the ambience of the old warehouses with timber beams that everyone wants, but solves all the problems of energy efficiency and light.”

Coincidentally, this month’s Arch Record has a sponsored feature on “tall wood” buildings. The IBC, it points out, limits commercial-occupancy wood buildings to six stories (vs. five for residential), hence the seven stories that Hines is proposing.