Monument Avenue at Belmont, Richmond, Virginia: one, two, and six-family houses, side by side, on one of America’s most famous residential boulevards

Many of America’s most celebrated urban neighborhoods, like the Fan in Richmond, have a fine grain of different residential densities. Neighbors might live in buildings of broadly similar sizes, but at substantially different densities. But the entire premise of American zoning, as established in Euclid vs. Ambler, was to maintain uniformly single-family districts — uniquely among any country, as Sonia Hirt as shown.

The world’s best loved cities are the way they are not because of zoning bylaws but in spite of whatever zoning may now be in place… Serendipity, complexity, conjunction, anticipation, surprise and delight: these very human experiences are what great cities offer. But zoning is a blunt, inflexible tool. Zoning is by definition exclusionary, limiting things to a preordained set of possibilities. It determines what cannot be done, rather than what can be It does not anticipate nor nurture new, untried forms of city-building or habitation. It does not, in short, encourage the city of desire.

So little of the [American] city was built before zoning was introduced that its more deleterious effects are much magnified. There is very little evidence of the organic city, the intricate web of urban spaces and built forms that rose before the heavy hand of zoning was applied. There is no “old town” core of narrow lanes and multiple layers of use. And there is very little unpredictability, no edge. At the risk of sounding simplistic, it is boring. 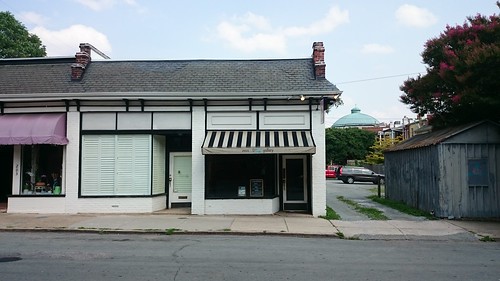 Bonus: down the street, an illegal mix of uses. Orchid shops and churches, oh my!