I’ll take a little step into the bus vs. rail rapid transit debate, spurred by recent articles in GGW, by attending the 2011 Sustainable Transport Award ceremony, and by Jarrett Walker‘s “Field Guide to Transit Quarrels.”

Generally speaking, I like to think of myself as relatively mode-agnostic. I have a slight sentimental attachment to rail, but recognize that BRT offers several intrinsic benefits over rail. Instead of making a blanket generalization, though, the relative costs of different underlying inputs might explain why BRT has found such success in Latin America, while rail makes more sense for Europe (and perhaps Asia). BRT requires more labor and more fuel (petroleum) than rail, but less capital (in both guideway and rolling stock). Labor and petroleum are relatively cheap and locally sourced in Latin America — whereas interest rates are high (significantly raising the cost of capital), electricity is comparatively expensive, and currencies are cheap, raising the price of imported railcars (there’s no local rail industry) and making locally-made buses comparatively cheaper. Cultural preferences might also come into play; only Argentina ever built an extensive rail network during the fin-de-siecle railroad boom; that also increases ROW acquisition costs, since (unlike parts of the USA) there isn’t an extensive rail network awaiting reuse. Europe faces an almost exactly opposed scenario.

Reston Town Center as built: small blocks allowed the project to be phased over the past 20 years. (Bing Maps) 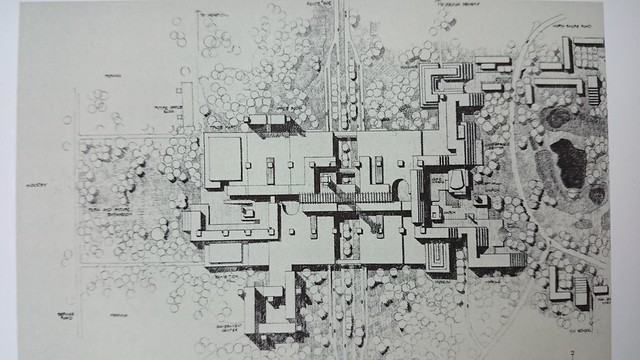 Earlier proposals (e.g., 1974) centered on a giant mall bridging roadways, but since it would have had to be built all at once it proved cost-prohibitive.

Another point of Walker’s that I’ll echo, and one in which BRT has a leg up: rapid transit projects need a clear phasing strategy; each step has to stand on its own. Indeed, I’ll draw an ease-of-phasing analogy with New Urbanism: several successful NU developments were once proposed as conventional projects, but later downsized into their current, much more profitable, NU formats. Reston Town Center and Battery Park City were originally intended to be the sort of gargantuan, self contained, internally oriented mixed use complexes that were quite popular in the 1970-80s, whether regional malls in the suburbs or John Portman developments downtown. A small chunk of that was even built at BPC before that project stalled amidst New York City’s 1970s financial collapse.

Both projects were redesigned and downsized; it turns out that streets and blocks made for obvious phases that were easier to build and finance incrementally by different parties, and required much less upfront investment in expensive infrastructure. (At sites like Illinois Center in downtown Chicago, such costs bankrupted the developer, leaving half-built overpasses to nowhere. Also, bear in mind that interest rates were much higher then.) And the results have been a phenomenal success from an investor’s standpoint — even more so when contrasted with the megaprojects that did get built, many of which are now undergoing costly, comprehensive redevelopment or renovation because they cannot incrementally change.

And three other points I’ll briefly echo:
– NIMBYism is about protecting home, and animals can be fiercely territorial.
– Project opponents can be characterized as “stuck in the present” (most common) or, at other times, “stuck in the future” (less common, but just as intransigent).
– Airline networks might be a good contrast between frequent connections (a strategy Walker prefers) vs. point-to-point milk runs.

One thought on “Technology choices & the importance of phasing”