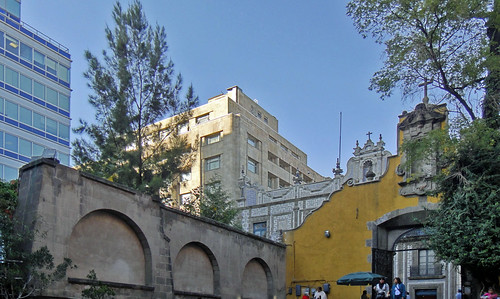 Kaid Benfield’s December articles about downtown had me pondering the role that downtowns play in metropolitan economies today:

I’m inclined to agree with Douglas Rae’s book “City”: the industrial American city, and its uniquely focused downtown, were the historical exception rather than the rule. Pre-war downtowns also had railroad-based transportation systems (perfect for bringing a lot of people to one central point), a more geographically centralized employment base, higher levels of social trust, and less inequality than we have today. The city in history was typically polycentric, and we’ve returned to that formulation.

Another shift since the postwar years, partly tied to increased inequality, is that cities now exhibit a much stronger sectoral geography. Whereas downtown used to be a fairly central location to reach a broad base of consumers, in many cities it’s now at one edge of the “favored quarter.” In DC, downtown was historically at the very eastern edge of the favored quarter, but growing wealth in spots like Capitol Hill have significantly changed that equation — and increased downtown’s desirability as a business location.

The era when downtown could “be all things to all people” is over: not only because of geography, but also because the Modern era of a mass market has ended, and there’s no possible way that any one place can cater to the vast array of divergent tastes that exist now. After a historically brief moment when everyone watched the same TV while eating the same processed foods, we’re in the customized era where 5,000 channels is still not nearly enough. Sure, the efficiencies that industrial modernism brought us are here to stay, but greater customization leads to richer and more authentic experiences, and thus make us happier (if not necessarily richer).

Yet the same fragmentation, pluralism, and polycentricity provides downtowns (and traditional urbanism in general) with a unique competitive advantage:

“Full-spectrum traditional places” will thrive because their fine-grained urban fabric features smaller increments of development, which better accommodate a broader, more complex mix of human activities. This approach can more easily cater to multiple narrow slices of the population than a mega-scaled edge city. It’s a more resilient approach: it’s telling that, to some extent, new urbanism was born from a prior financial crisis, when white-elephant redevelopments crashed under the weight of overwhelming debt loads and upfront infrastructure requirements.

Besides, as Richard Sennett argued in “The Uses of Disorder,” dealing with the seemingly overwhelming disorder of cities instead teaches individuals to understand and value the complexity of both life and human relations. Jane Jacobs similarly sought to demonstrate that the city was valuable because of its systems’ complexity, a value that the reductio ad absurdum Modernists she fought against could not understand — but a crucial value which gives urban systems their adaptiveness and resilience.

Urban disorder (since Sennett’s day, much tempered by plunging crime rates) is a useful analogue to the incredible variety of experiences that people now find online. Indeed, it turns out that as information technology makes order out of the chaos of information found online, the translation of these technologies to real places have resulted in a flowering of online services that streamline the disorder of the city — e.g., finding the ride that’s going your way. These services thrive upon complexity, and may help make the choice of city living even easier for a wider array of individuals than today. Our patience for dealing with complexity might remain the same, but technology makes it easier to cut through the clutter and enjoy the benefits of propinquity without quite as many hassles.