Eight years on, the District seems to have gotten a nice return on its $20 million investment into Progression Place, the long-awaited development that replaced a city-owned parcel above the Shaw Metro that some called “the block of blight.” Not only has the Mid-City neighborhood gained an employment anchor (DC’s grants went to the office portion) and 50 units of affordable housing, but Progression Place also created a lively block of walkable retail that complements DC’s adjacent investments in the Metro and the Howard Theater. So yes, although you may have to wait a while, sometimes city plans do eventually work according to plan.

From a planning perspective, Progression Place features a broad mix of uses at a fairly high intensity:

Just as importantly, the building’s architecture pulls off the “vanishing high-rise” trick quite well by setting the tower 35′ behind the storefronts. What could be an overwhelming slab of an apartment building — with a net density of 301 dwelling units per acre, excluding the site’s office and T Street wings — disappears at street level behind the historic row of storefronts: 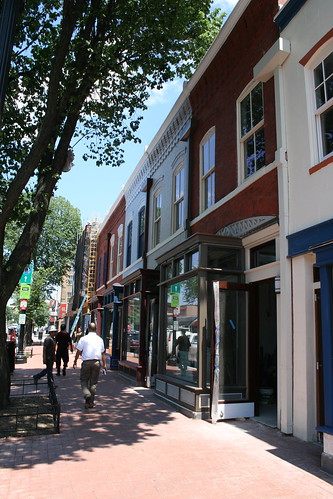 The 19,500 sq. ft. of retail is almost entirely housed behind retained and rehabilitated historic storefronts, retaining not only their appearance but also the fine-grained scale — i.e., the neighborhood’s classic rhythm of narrow lots and small bays. The original finishes, like exposed brick, carry through to the interior — but behind the front room, modern new building services are provided in the back of the house, as part of the new structure. This transition (visible in the retail floor plan) is subtle enough to have evaded notice by at least one table of architects I was dining with.

In some respects, this project probably benefitted from having local firms in charge of development and leasing, including layering a complex capital stack, and then selling the property on to a national income-oriented owner. Four Points’ next project might well be downtown Anacostia, a site they’ve been waiting on for several years.

Disclosure: I have no financial interest in any businesses or properties named, or located on named sites.

[Blogging update: now that I’m working at Streetsblog, I might be able to repost some pieces from there, and will continue reposting items cross-posted to Greater Greater Washington or written for other venues.]