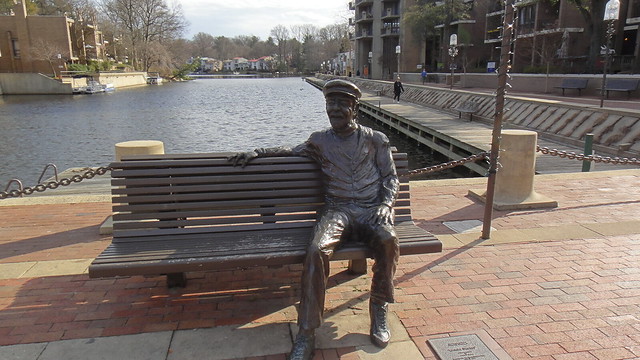 [Nobody’s around to sit with Bob by the shores of Reston’s Lake Anne.]

One new fad insists that Modernist urban plans were designed as totalizing works of art, and thus should be frozen in their as-built, “apex” condition. That’s even though such places often were never built to their originally planned capacity, and almost always fail to draw the crowds that were promised. However, most of the auteurs who dreamt up and built these places have passed on, and we thus have no way to ask them whether their plans were truly end-state designs, or whether they were starting points for natural urban evolution — whether the founders hold more sacred either the intent, or the letter, of their plans.

Tom Jackman from the Post gets a word in with Robert E. Simon, one of the few long-lived Modernist visionaries who still plays an active role in his built creation:

Redevelopment is also in the works for Reston’s original centerpiece [link], the Lake Anne Village Center, including the addition of 800 residential units nearby. That, Simon said, ‘is an answer to a prayer’ because more than anything else, he still wants Reston to one day be a true walkable community… Of the seven village centers that Simon envisioned as creating a sense of community, only Lake Anne resembled that vision of shops, businesses and housing in one place. His hopes for multiple high-rises never materialized, so Lake Anne’s retail shops gradually fell into decline or closed… Simon remains convinced that village centers can create the community that makes Reston distinctive and is thrilled that a developer plans to remake Lake Anne Village Center, where Simon lives. The plan will replace an 180-unit apartment complex with 1,000 townhouse and apartment units, a concept on which Simon was consulted.