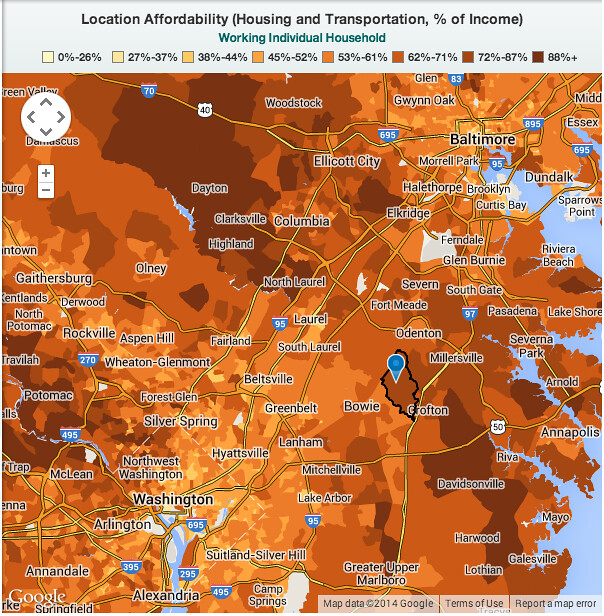 HUD’s LocationAffordability.info, which maps CNT’s H+T Index ([housing + transportation costs]/income), shows a sharp affordability divide slicing across Maryland’s suburban heartland, from the northwest to the southeast. This particular example emerged while I was researching yesterday’s Streetsblog USA post about the Citizens Budget Commission’s report citing DC, SF, and NYC as being rather affordable from an H+T perspective — but using some slightly odd figures.

The added irony: median household incomes in Anne Arundel (again, metro Baltimore) are quite high: $14,000 higher than in Prince George’s. Similarly, Howard County (Clarksville, Columbia) is Maryland’s wealthiest, with median household incomes $12,000 higher than in neighboring Montgomery (Olney, Gaithersburg). Although Anne Arundel and Howard derive much of their income from their legions of Washington commuters, they do border Baltimore County and the Maryland state legislature has designated them as part of metro Baltimore. Thus, for the H+T Index’s purpose, they’re comparatively deprived.

The H+T Index is a useful tool, but it does rely on a lot of moving data points. In this case, it’s a bit strange that the numerator (H+T costs) are defined by a very small geography (census tracts in the map, cities in the CBC report), but the denominator (income) is related to entire metro areas. While it’s true that labor markets are metropolitan in scale, it’s also true that incomes vary locally just as much as housing and transportation costs do.

One thought on “LocationAffordability’s denominator problem”