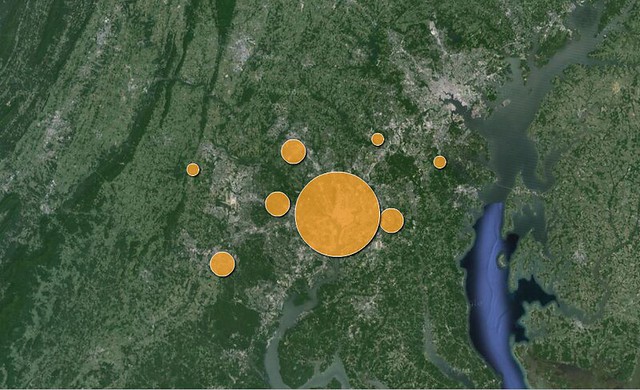 Growth in 25-34 population for DC-area counties, 2010-2012, with core jurisdictions aggregated for clarity. 42% of the growth is concentrated inside “the diamond,” which is home to 18% of the region’s population. A similar trend was noted in metropolitan NYC.

1a. Another recent report (by James Hughes and Joseph Seneca, reported by my colleague Stephen Miller) confirms that population growth has overwhelmingly shifted towards the core in the New York region since 2010. Third-ring suburban counties like Dutchess and Hunterdon are actually losing population, overall suburban population growth has slowed by 80% — and the core is on pace to recoup its entire 30-year postwar population loss (1950-1980) in just one decade (2010-2020).

Also echoed: a much larger proportion of young people (20-somethings) are heading downtown. “From 1970 to 1980, suburban counties captured 96 percent of the growth in this demographic. From 2010 to 2013, that figure dropped to 56 percent, with the urban core becoming increasingly competitive.” Since the report is from Rutgers, it defines “core jurisdictions” as including Hudson, Bergen, and Essex counties.

We’ve seen these trends reported in a national (PDF) and even DC context, but it’s worth noting since the NYC area is so huge and its economy has done well since 2010.

2. This fall, Streetsblog USA will be publishing a three-part article I co-wrote with Angie Schmitt about what befell the Indiana Toll Road P3. Bad timing and bad traffic projections were just the tip of that iceberg.

3. Jonathan O’Connell from the Post reported last week that a new Fairfax County school was repurposed from an abandoned office building.

It’s a clever response to the changing Skyline/Bailey’s Crossroads neighborhood, where an aging housing stock and distance from transit have created a Toronto-esque high-density suburban immigrant enclave. Larger immigrant families have pushed up population density and school enrollment; retail is thriving, judging from the continued traffic jams and low vacancy rates. At the same time, office users have engaged in a “flight to quality,” towards newer and more efficient buildings closer to transit.

What’s more, the cost was very competitive. Fairfax spent $19 million in 2014 to buy and refit the building for 800 students (granted, a few amenities are still forthcoming) — which is right around the national median cost for a greenfield grade school in 2010.