Even in “the city without ground,” #UmbrellaRevolution has taken not to the ersatz quasi-public spaces floating above Central, but instead to the ground — or at least to the traffic-sewer highways that fill what little is left of the ground: 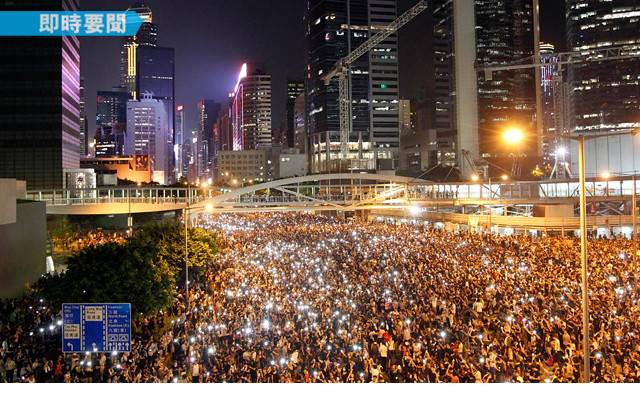 Heretofore streets functioned as periodic reminders and enforcers of the civic domain; the new patterns of city building remove even this remaining vestige of public life, replacing them with an analogue, a surrogate.

Precisely because downtown streets are the last preserve of something approaching a mixing of all sectors of society, their replacement by the sealed realm overhead and underground has enormous implications for all aspects of political life. Constitutional guarantees of free speech and of freedom of association and assembly mean much less if there is literally no peopled public space to serve as a forum in which to act out these rights…

[Protest] activities have been displaced over the past decade from the square and main street to the windswept emptiness of City Hall Mall or Federal Building Plaza. To encounter a ragtag mob of protestors in such places today renders them even more pathetic, their marginality enforced by a physical displacement into so unimportant, uninhabited, and unloved a civic location.

Only a full-scale revolt, involving hundreds of thousands, can be taken seriously under these conditions.

Not that a U.S. Supreme Court case matters much in this context, but Thurgood Marshall’s concurring opinion in the Pruneyard Shopping Center case is also worth remembering (emphasis added):

[S]hopping center owners had opened their centers to the public at large, effectively replacing the State with respect to such traditional First Amendment forums as streets, sidewalks, and parks…. Rights of free expression become illusory when a State has operated in such a way as to shut off effective channels of communication.

(Image of Occupy Central on Monday, 29 September 2014 from Apple Daily/NextMedia.)

One thought on “Hong Kong’s revolution is in the streets, not the skyways”