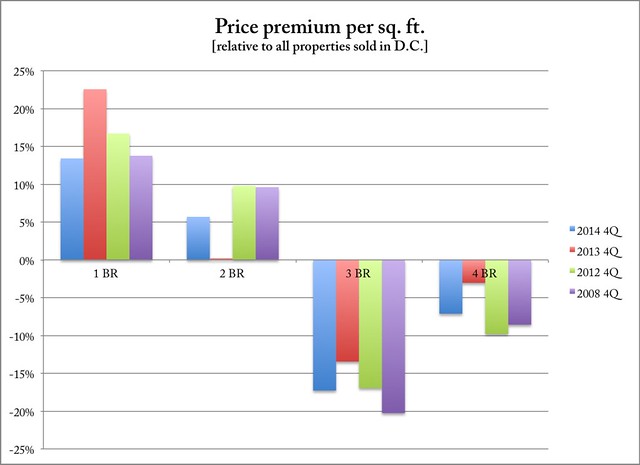 My name is Payton Chung, I live in yes, an apartment in Ward 6, and I am testifying with regard to Case 14-11.

This rezoning amounts to a severe reduction in the potential number of housing units within the District. This action seems incongruous with the Office of Planning’s recent arguments that the District is adding a thousand residents each month, which will result in exhausting its “zoned capacity” for new development within 25 years — and perhaps sooner, if ambitious plans like the Sustainable DC plan bear fruit.

OP has suggested that existing single-family neighborhoods should accommodate some of that growth, through accessory dwelling units and corner stores. Yet now OP has reversed course, shutting the window on secondary units in one-third of the central city, and in some regards (like with height) making R4 more restrictive than the lower-density R1, R2, and R3.

The supposed principal rationale that OP offers, that further restricting an already severely constrained supply of housing will somehow make housing more affordable to a select class of households, is spurious and discriminatory towards smaller households like mine. As former OP director Harriet Tregoning once said, “Part of the challenge is to right-size our housing stock so we can have the type of housing that matches the needs of our residents.”

Tregoning pointed out then that larger housing units are already amply supplied within the District. Today, there are 2.4 large housing units in DC for every one household that needs one. More specifically, 33.5% of our housing units have three or more bedrooms, but 13.9% of our households have four or more residents.

This imbalance results in the market awarding a substantial discount to large units. On a per square foot basis, three-bedroom units sell for 15% less than the citywide average, while zero and one bedroom units pay a 15% premium. And yet OP wishes to exacerbate this crisis by further constraining the supply of small housing units, with no guarantee that larger units will be at all affordable.

I happen to enjoy living in a high-rise apartment building, but it is neither feasible nor desirable to shoehorn all residential growth solely into the rapidly diminishing areas available for high-rises — which are, of course, subject to the Height Act. High-rises have intrinsically high costs due to their fireproof construction, elevators, and interior corridors.

It’s no accident that most of North America’s great urban neighborhoods, from Boston to Brooklyn to Chicago to San Francisco, are comprised of small, low-rise buildings with 2-4 units apiece. Such buildings are affordable to build and maintain, yet create just enough density to keep eyes on the street and shops within walking distance. In fact, Milwaukee reveres two-unit pop-ups as the city’s characteristic housing type — former mayor John Norquist described its so-called “Polish flats”  as a housing type “specifically designed both to accommodate and to accelerate the economic improvement of the family.”

Almost 40% of Boston households live in 2-4 unit buildings, and so do nearly one-fourth of households in New York City and San Francisco. Yet here in DC, scarcely one in nine of our households do.

This text amendment certainly has a number of supporters, but in the end we must also consider its inadvertent result: to deny thousands of people the option to live in neighborhoods like Columbia Heights, Mount Pleasant, Park View, Trinidad, and Capitol Hill; to further diminish the prospect of more walkable retail within these neighborhoods; to sharply limit investment in some of the region’s most centrally located areas; to make Washington even less affordable to the young strivers who are, more than ever, its lifeblood.

Thank you for your time.