Neil Flanagan recently wrote about current and past proposals to heal the urban-renewal scars that separate the Kennedy Center — which should be a terrific urban amenity — from the city around it. 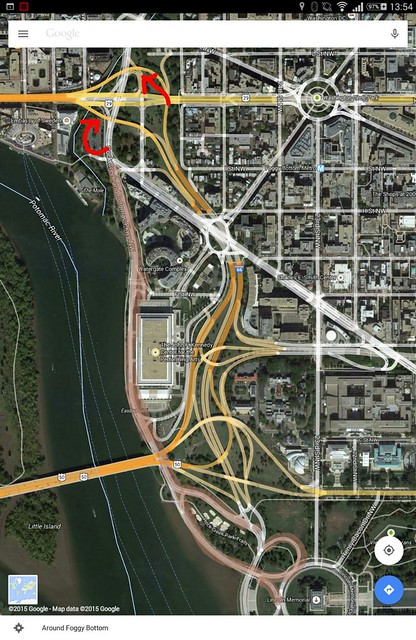 The KenCen, along with the Watergate complex and what’s now the Saudi embassy, stands in a tiny island isolated from both the city and the river by two parallel highways. Neil’s post focuses on a long history of proposals to bridge the chasm of I-66, built alongside this island as part of the grand urban renewal scheme that obliterated Foggy Bottom’s industrial heritage.

Yet the 1920s-era Rock Creek Parkway that runs on the riverfront through this stretch is perhaps a greater urban offense. It’s a limited-access highway that squeezes strolling pedestrians and cyclists into a narrow riverfront strip. It intervenes between the bike path and the river at one point, creating a particularly confusing, and dangerous, joint in the otherwise admirably complete trail network along the region’s waterways, and pretty much completely interrupting any pedestrian flow between the Mall and the waterfront. (Speaking of harrowing junctions, its at-grade intersection with I-66 creates a terrifying two-stage left turn at the end of I-66’s Independence Avenue ramp.)

And it could be eliminated with just two ramps — the ones shown in red in the map, linking the existing and underused ramps that link I-66 Extension to the Whitehurst Freeway, to Rock Creek Parkway. Adding these two ramps would enable cars that currently use Rock Creek Parkway to use the woefully empty I-66 that runs just two blocks east — and thus permit depaving Rock Creek Parkway (in pink), south of Virginia Avenue and north of the Lincoln Memorial.*

(A 1998 FHWA study also proposed the same ramp at the northeast quadrant of the interchange, but instead of a loop suggested a signal and a left exit. It also proposed to leave RCP, and grade-separated the Ohio/RCP intersection.)

Creating a linear park along the river between the Thompson Boat Center and the Lincoln Memorial would more clearly link three great linear open spaces — the Mall, Rock Creek Park, and Georgetown Waterfront Park and the upstream parks. (A clearer, perhaps grade-separated walkway behind the Lincoln Memorial would still be needed.) It would finally connect the KenCen and Watergate to the water, and break apart the asphalt chains that encircle the old Watergate Steps. It would also attach this little urban island to the city (well, Georgetown).

It would accomplish these aims at a cost far lower than decking over I-66, a proposal that has failed several times for want of funding. The surrounding renewal-era fabric would require retrofitting if such a deck were built, since most of it was built with high walls that ignore I-66.

Yes, direct access between Memorial Bridge and Rock Creek Parkway would be eliminated. Drivers would instead have access to the Roosevelt Bridge, which is currently denied, and could use Virginia and 23rd to reach Lincoln Circle and thus Memorial Bridge.

A similar concept was floated on POP in 2012 and roundly criticized in the comments, although it seems most of the commenters misunderstood which segment of RCP was being referred to.

* On second glance, the north Lincoln Memorial loop may be needed to allow Independence Avenue traffic to flow onto Memorial Bridge.