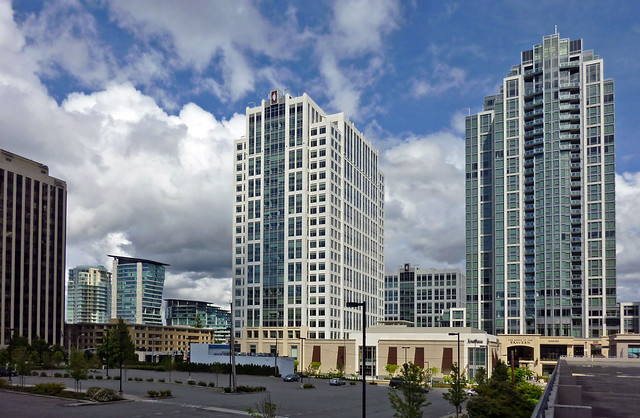 Bellevue was not one of the “suburban vibrant centers” examined for a NAIOP report on office occupancy trends.

Some recent reports left me appreciative of their aims and ends, but not exactly how they got there, and in particular with how other analyses have defined key terms.

1. The Living Community Challenge certainly provides an inspiring goal to reach for, notably in its use of elegant performance criteria that broadly require “net positive” environmental performance on site — broadly, that new developments can strive to shrink their ecological footprints to fit within their actual footprints. It also pretty seamlessly integrates the Transect throughout, and in a balanced way that sometimes rewards and sometimes penalizes both ends of the spectrum.

However, having participated in the creation of LEED for Neighborhood Developments, it’s telling that some of the same battles in that scheme have emerged within this one. Prescriptive approaches still occur throughout, and some of the personal-health ones are somewhat wishy-washy. (The emerging science of health impact assessments may have been a useful complement here.) The equity section (“petal”) has a lovely intro, but its imperatives don’t address many social criteria — affordable housing is a notable omission — and almost entirely use prescriptive standards. Another long-running debate was over the use of prerequisites in the rating scheme: It seems strange that a baseline, “Petal Community” certification can be done while ignoring a majority (four of the seven) of the petals.

I’ll be interested to learn more about the Challenge in the coming weeks, and to see how others feel about whether it’s rigorous and balanced.

2. Kriston Capps brings up Mikael Colville-Andersen’s term “magpie infrastructure” in a recent CityLab piece. Bicycle and pedestrian infrastructure, examples like the Bloomingdale Trail aside, rarely needs architects’ attention — their structure-first solutions are usually fundamentally anathema to bicyclists’ lazy inclination to not climb hills. By and large, people should be encouraged to stay at grade, and landscape architects and engineers should be entrusted with their care.

Closer to MCA’s home, the current BIG exhibit at the NBM includes Loop City (video; skip to 2:30), a proposal for an elevated rail loop around Copenhagen + Malmo. The proposal lifts up the stations so that trains decelerate on the approach and accelerate as they exit — a clever idea lifted from subways like Montreal’s. When done below-ground, this brings trains closer to the surface just where they’re needed, but when above-ground, the same approach antagonizes the energy needs of the passengers (who need to climb ever-higher escalators to get to the platforms) and the energy needs of the trains.

Another obvious flaw is that the proposal repeats the Corbu-in-Algiers mistake of thinking people would want to live in flats beneath a railway, without realizing that below-the-tracks spaces are almost always only valuable in situations (I’m thinking in Ginza, the Viaduc des Arts, or 9 de Julio) where such space is just the cheapest way of getting valuable ground-level, street frontage. Even maglevs are pretty awful to stand right underneath.

Besides, haven’t we tried grade-separation of different modes before?

3. NAIOP recently published a report offering slight encouragement to the notion that office users are increasingly choosing mixed use environments — namely, 24-hour CBDs and 18-hour “suburban vibrant centers” (their terminology, not mine) — over single use suburban office parks. Their findings indicate that rental rates are indeed higher in CBDs, but that CBDs haven’t seen as much absorption as suburbs, whereas “vibrant” parts of suburbs had a verifiable edge in the leasing market. There’s certainly plentiful anecdotal evidence, and this has been the mantra of “Emerging Trends” and other qualitative reports for quite some time, but I’ve seen few attempts to quantitatively analyze the phenomenon.

Yet the two sets were compared quite differently. The comparison of CBDs vs. suburbs was strictly quantitative, an approach that didn’t control for the quality of the urban environments — downtown absorption was hurt by including a great many “dead” downtowns (Dayton, St. Louis, Hartford) among the comparison set. Most of the liveliest downtowns have seen strong positive absorption, since it’s less the CBD location than the mixed-use amenities that draw users.

The “vibrant centers,” on the other hand, were compared using a robust paired-case approach: single-use suburban areas were paired with mixed-use suburban areas within the same part of town. They even came up with a pretty strict definition of such centers and their comparison sites, using Walk Score and building-level maps. This better methodology dives into why people are migrating towards such sites, and goes beyond the not-terribly-nuanced submarket definitions found in typical office market reports.

Although the lower absorption figures for CBD office may look discouraging at first glance, it’s necessary to consider both that higher rents might result in tenants using CBD space more economically. Square feet don’t necessarily correspond with people, much less dollars. (Edit 26 Feb: City Observatory has a new report indicating that job growth has indeed been more robust in CBDs than in suburbs.) In addition, the supply constraints on new downtown office might suppress demand from space-hungry users — e.g., many large companies are expanding both in San Francisco and Silicon Valley, but adding more jobs in the Valley where construction isn’t limited by constraints like Prop M.

4. For good measure, here’s one instance where the methodology and the results both turned out okay: Governing’s recent analysis of gentrification at the Census tract level. The scale of the analysis is correct, the results pass the smell test, and the variables used (rankings of changes in household income and physical [home values] and cultural capital [college attainment]) seem reasonable.

© 1996-2019 Payton Chung, opining for himself and not his employer or other affiliates. Licensed under a Creative Commons license.