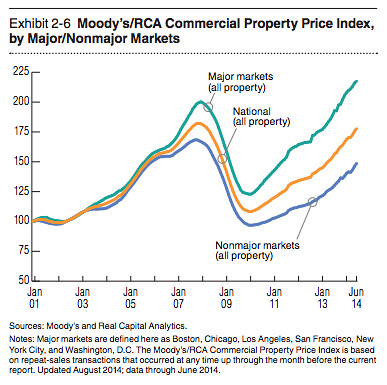 No, it’s not just you: prices are increasing faster in gateway cities than in “nonmajor markets.” Graph from ULI/PWC’s 2015 “Emerging Trends.”

One of the over-arching trends in the post-industrial economy is that the rich are getting richer, to a great extent because technology makes it easier to increase returns towards a few, at the expense of the many. Researchers have recently found that a substantial proportion of wealth inequality is due to higher housing prices — so, it stands to follow that the places which house rich people would also get richer.

Earlier, I wrote that previously accumulated human capital advantages means that “The most valuable places are becoming even more so: they account for not only an outsized share of wealth but also the gains of recent years.” This appears to be taking place both between metro areas and within them.

The combination of recession and recovery have had very differential impacts on metro areas, according to the Brookings MetroMonitor. Metro economies whose wealth was tied to housing or manufacturing have lagged, while those tied to technology and energy have grown substantially. (Necessary caveats: This map shows change in gross output, which is heavily influenced by population — both baseline and growth. Thus, it may overstate growth in smaller, faster-growing metros and understate growth in larger, slower-growing metros. Also, the fossil-fuel extraction industry has done very well recently, explaining one-third of Texas’ relative gains, but past performance does not necessarily predict future results.) 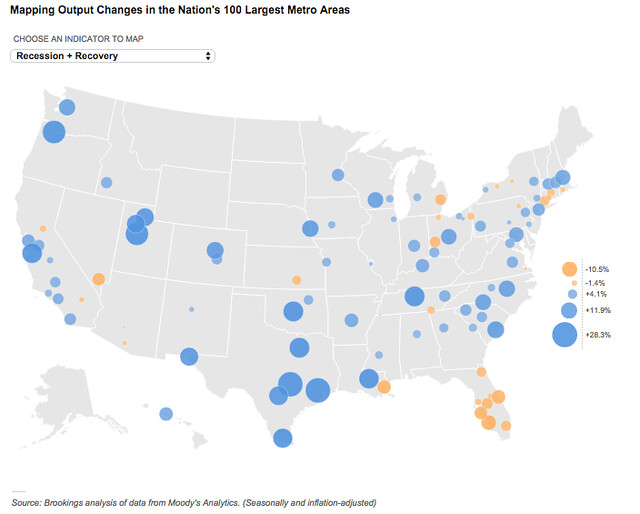 So, to some extent, differential price gains are related to income gains — after all, property prices generally track local incomes. Yet prices in first-tier cities, as shown in the graph above, are increasing even faster than incomes, and some form of the hated “speculation” may be at fault. Property in these so-called “gateway cities” is an increasingly popular investment for institutional capital — the money managers who store wealth for the rich. Institutional investors have raised their allocation to real estate by over 50% since 2010; super-low interest rates on cash seem to be behind a surging interest in “alternative asset classes.” 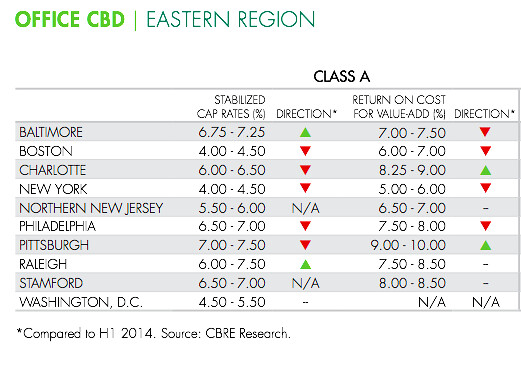 Note that the list is bifurcated: Boston, DC, and NYC, the gateway cities, are all 5% or under, and everywhere else is 6% or up. Investors are willing to pay a lot more money to get the same income in larger (and more reliable) markets, and so prices get bid up.

The same factors that draw equity (ownership) investment to gateway cities also draw commensurate amounts of debt investment — amplifying equity’s effects two to four-fold. Leverage creates a vicious cycle, as we saw during the housing boom: Banks lend based on comparable sales; higher comps mean higher prices are justified, which results in more debt, which raises comps even higher for the next guy.

The story of American cities in 2000–2010+ is not urban–suburban, or millennial–whatever, but of economic sorting. #RVP2015