The same divergence in fortunes appears to be accentuating price differentials between metropolitan sectors (essentially, “sides of town”). In an economy where the rich are getting richer than everyone else, the rich side of town is also increasing its comparative advantage over everywhere else. 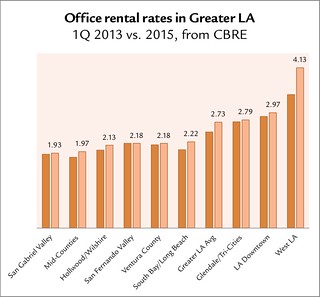 This split was apparent during a recent trip to Southern California. The region might still be “polycentric,” but where one side of town — the Westside favored quarter — now completely dominates local wealth creation. What were merely lopsided prices before have now become absurdly imbalanced, with mediocre buildings on the Westside commanding top rents while perfectly nice areas, like Long Beach and Pasadena, are lagging badly.

In cities where houses or offices on the “right” side of town are scarce, such real estate becomes a privilege only available to the wealthiest people — who, as we’ve noted, are getting wealthier, and in large part because of their houses on the “right” side of town. Even though real estate prices generally track local incomes, the favored quarter of Los Angeles now has prices that track only the exploding incomes of the ultra-rich.

This Redlands ISEA animation of LA-area housing prices from 1988 to 2011, over the course of several cycles, illustrates the “flight to quality” that has occurred during the three busts (mid-90s, early-00s, 2010). At the start, high-value areas are relatively well dispersed across the basin, with only the inner city (particularly the near south and east) suffering from low prices. But, over time, the cumulative advantage of being near the beach increases over time — especially because prices don’t fall as much during the busts, but grow by just as much during the booms.

The trend is perhaps in sharpest relief in high-Gini areas like LA, but is broadly occurring across the country. Joe Light reports in the Wall Street Journal that lower-priced houses are lagging even as prices nationally rebound:

Between January 2006 and May of 2015, the median value of homes in the bottom third of the market has dropped 13% to $101,900, according to Zillow. The median in the middle third is down 6% to $172,600, while in the top third it is off 4.5% to $325,800… The [disinvestment] cycle has been hard to break in large part because low-wage workers have seen little, if any, income growth during the recovery—putting them in weak position to qualify for mortgages.

This has tremendous implications for intergenerational social mobility, which is closely tied to income, human capital, and wealth. Not only do wealthier families have more private resources for their children, but in a country where schools are largely funded with local property taxes, wealthy communities have more public resources for their children. Three generations ago, legal segregation awarded suburban nest eggs to white families while denying black families the same opportunity — resulting in a “titanic wealth gap” between the races today. (Furthermore, generations of zoning have sought to freeze this status quo, and perpetuate the original injustice)

Thus, the “segregation tax” that penalizes property values in majority-minority communities creates a vicious cycle both for families and for communities, and one that is only getting more pernicious — sadly illustrated recently by the events in Ferguson, Missouri.

Locally, stagnant housing prices in Prince George’s County have contributed to an ongoing foreclosure crisis. Stagnant housing demand from the “underwater limbo” is compounded by its relative isolation from the favored quarter’s jobs engine, and the area’s ongoing “segregation tax” discount. For example, in 1965-1975, the Levitt firm built two large “Levittowns” in suburban DC — Belair in north Prince George’s and Greenbriar in south Fairfax. Even though these are the favored and less-favored sides of their particular counties, near-identical ranches recently sold for an average of $300K in Bowie and $440K in Fairfax.

Meanwhile, formerly moribund downtowns adjacent to job-creating Favored Quarters are finding some success reinventing themselves as the easiest place to add new residential, away from the fierce FQ NIMBYs. The boom in downtown LA’s residential and retail market diverges sharply from its flatlining office market — which still suffers from 20%+ vacancy even though dozens of office towers have been converted to other uses. Downtown Atlanta and Dallas are similarly benefitting from escalating prices to their north.