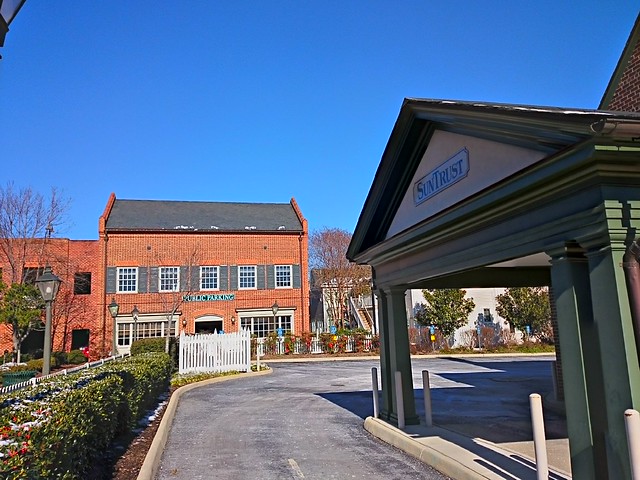 The entrance to ye olde Public Parking lies immediately beyond ye ancient Bank Drive Thru… Jokes aside, Colonial Williamsburg’s Merchants Square is an interesting 1930s-era transitional exercise in proto-shopping center design. As the site’s National Register nomination notes, this development largely explains why early shopping centers on the East Coast adopted a “Colonial” dress with red bricks, white columns, and pitched roofs. I wish that more of the era’s shopping centers had taken its lead in planning, rather than architecture, and moved the parking from in front to mid-block.

On a recent visit, it was surprising to see how far retail has sprawled around Williamsburg — exacerbated, no doubt, by sales-tax revenue rivalry between the City of Williamsburg and the surrounding James City County. Yet many of the new “lifestyle shopping villages” at the outskirts, namely New Town and High Street, suffer from subpar locations and high vacancy rates, and none has emerged as the Class A champion. I wonder how a less conservatively managed Merchants Square could have grown by just one or two more blocks north or south, adapting to the town’s growing and changing clientele of students, local residents, and tourists. Alas, we will never know.