I’m not about to fall into the essentialist trap and say that “drivers here are obviously different,” but I don’t remember having to watch out for sudden U-turns before biking in traffic in DC. Sometimes, I see a few sudden U-turns within the span of traveling just a few blocks. I’ve long thought that U-turns are best avoided (better to just go around the block); evidently this is a locally learned behavior, as local laws vary.

That said, the sudden U-turns I see every few blocks in #DCtraffic are still dangerous and illegal #TheMoreYouKnow 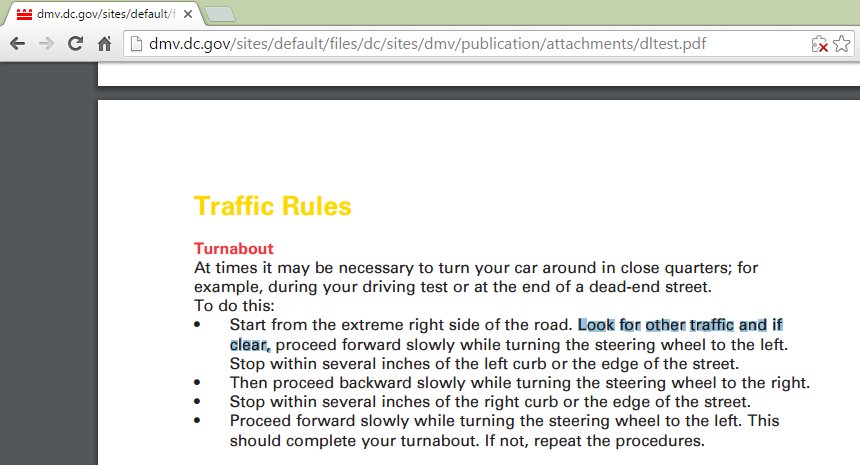 A letter sent to Council in December in response to a CSG action alert:

I’m writing to urge you to support DDOT’s plans to launch a Performance Parking trial program in the Gallery Place-Chinatown-Penn Quarter area, adding to the three successful trial areas that already exist in Columbia Heights, the Ballpark District, and the H Street NE Corridor.

By way of introduction, I am a researcher and writer on urban planning topics who has had articles published by journals like the prestigious Transportation Research Record. I am also a frequent visitor to the Gallery Place-Chinatown area — it’s the nearest retail center to my DC home and since I volunteer at one of the area’s museums. Not only that, but three generations of my family have called DC Chinatown home, and my family continues to gather in Chinatown for special occasions. I have also used had the pleasure of using Performance Parking in four cities — Los Angeles, Pasadena, San Francisco, and, yes, the District of Columbia (around Nationals Stadium). My experience has been uniformly excellent across the board.

Sadly, the news media has widely parroted fear-mongering lies about this program, spread by non-resident lobbyists for suburban commuters. These falsehoods focus almost entirely on the absolute highest possible price for parking — a price that will only be charged in a small subarea, for a small fraction of the available time. This price will absolutely not the vast majority of times and places. In particular, the peak rate will not affect people like nighttime workers who are traveling at off-peak hours and for whom driving may be the most reasonable mode choice. Perhaps most absurdly, these lobbyists appear to be completely unaware that Performance Parking already works very well here in the District, and over its seven years of existence has not resulted in any of the nightmarish scenarios that the media has seized upon.

For the small percentage of occasions when this peak rate will apply, the rate really is not at all noteworthy. Nationals fans already pay $8 an hour for metered parking during games, and it’s only fair that Capitals and Wizards fans do the same. Meanwhile, private lots within this area charge an average of $16 for one hour of parking during weekdays, and up to $51 an hour for special events.

Again, I urge you to expand the already-successful Performance Parking scheme to new parts of D.C. Thank you for your time and consideration.

I am writing to call your attention to a dangerous, but very easily and cheaply fixed, intersection: where the northbound exit ramp from 14th Street SW (US 1) intersects with eastbound Maine Avenue, SW. 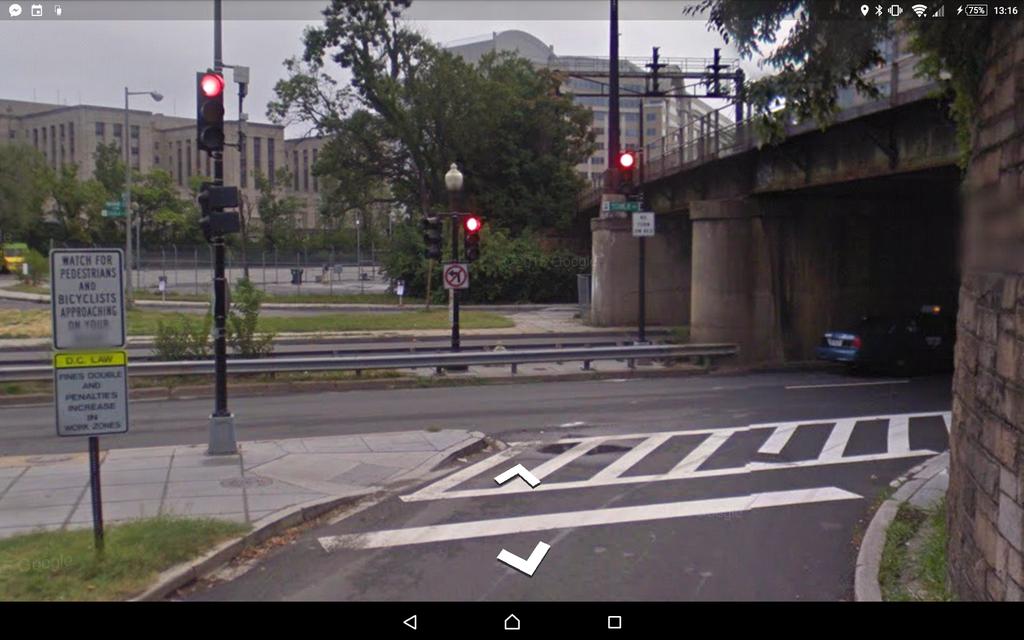 Right turns on red are already banned at this intersection, since structures make it impossible to see around either corner. Such turns present an extreme danger to pedestrians and bicyclists proceeding northwest on the Anacostia River Trail (on the Maine Avenue sidewalk here); they would be approaching from the right on a green light.

This intersection already has three different signs that alert drivers to this particular danger:
– NO TURN ON RED under the right signal
– WATCH FOR PEDESTRIANS AND BICYCLISTS APPROACHING ON YOUR RIGHT mounted to the left
– [Bicycle] XING 250 FEET further up the ramp
Regardless, I often see drivers attempt, or make, right turns on red here. This is especially a problem at night, when the three glowing red lights overshadow the unlit signs.

The simple fix that I’m requesting is that the red-ball signal lights be modified to show red-arrows instead. All three of the green lights at this intersection show arrow signals, indicating that the way is clear to make a right turn on green. However, none of the red lights are outfitted with the same $20 arrow inserts. 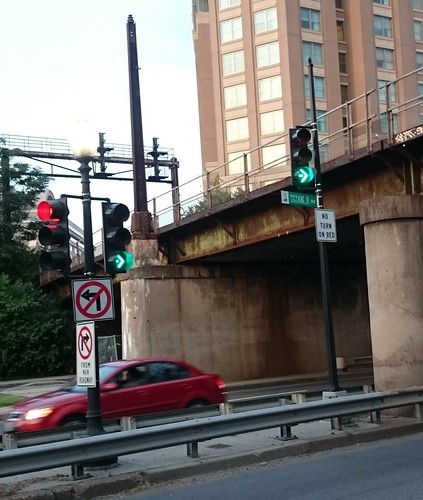 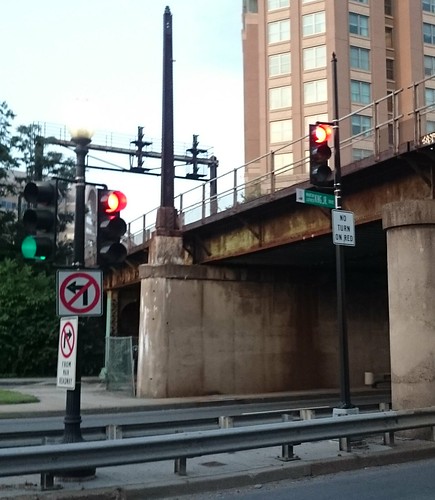 Adding the inserts would make it absolutely clear to drivers, day or night, that right turns cannot be made on a red light. DCMR 2103.8 stipulates that a “steady red arrow” signal does not permit a right turn on red under any circumstance. Nor does the intersection permit any other movement except a right turn.

Your prompt consideration of this matter would be much appreciated. 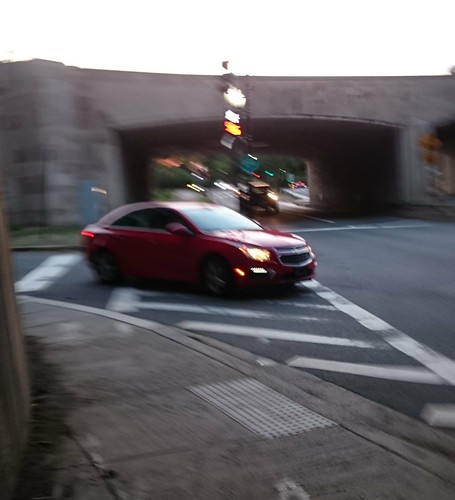 Car driver running a red light at high speed, cutting off a cyclist who clearly has right of way and must suddenly stop