Some people watch “House Hunters” for hours on end, and others peruse Curbed to imagine themselves inside huge mansions. Personally, I’m partial to idly imagining what could happen with those quirky old buildings that show up on the commercial listings. 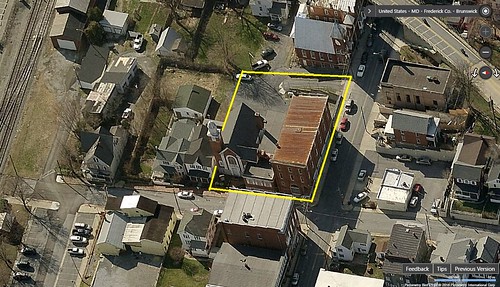 1. The property: Two business-zoned buildings on the main street of Brunswick, Maryland, a commuter-rail town that’s 15 miles to Frederick or 18 miles to Leesburg. The train trip to Washington Union Station is about 90 minutes, or it’s a a good bike trip — 55 miles up the C&O towpath from Georgetown, or via the W&OD and pretty country roads from Arlington. Brunswick has an almost-intact core of historic houses and shops, perched above the Potomac River, with great views of hills and woods and a railyard (yay). Because the downtown is on the National Register, renovations qualify for HTCs. It’s a railroad town that was incorporated only in 1890, so its detached frame houses have an unusually Midwestern feel. There’s free weekend parking at the MARC station, at lower left in the photo.

The problem: Brunswick is cheap, but it’s just a bit too far from the metro area to draw commuters (45 minute drive to either Dulles or Rock Spring), and on its own, it’s not exciting enough to be a day-trip destination. Old churches are expensive to reconfigure and maintain, and churches can be picky sellers. The commercial building is priced well above its assessed value of $571,800. The buildings’ configuration puts 3/4 of the space at ground or basement level, which is problematic given the limited market for retail.

Suggested buyer: An inn-restaurant catering to food/wine tourism, using the McMenamin’s model. Brunswick is accessible by commuter rail and highway, and sits between the renowned and thriving wine/beer/cider industries of Frederick County and Loudoun County — which have surprisingly few non-auto-oriented lodging options for weekend tourists. (Besides some B&Bs, Leesburg has one inn.) Downtown Brunswick is sleepy, but has signs of life: there’s already a brewery a block over, a coffeeshop in an adjacent old church, a B&B two doors down the side street, and a railroad museum. The building has event spaces, a catering kitchen, enough space for about 15 rooms upstairs, and on-site space for deliveries, tour buses, etc.

An alternate plan: the Potomac Street building might pencil out as loft apartments upstairs and a production-on-premises retailer (e.g., these neighbors) in the lower floors.

2. The property: Former Pierce School, 1375 Maryland Ave NE, Washington, D.C., $7,250,000. This decommissioned public school, just a block from the Atlas Theater and H Street, achieved some notoriety when it was last on the market in 2014 [WSJ, UrbanTurf]. A multifamily developer bought the old school and converted it to 10 units — seven normal-sized loft apartments, two flats in an adjacent house, and one absurdly tricked-out, 9,500-square-foot penthouse with ceilings up to 32′ high, five bedrooms, an office, a screening room, and a roof deck.

The problem: The (correct) thinking in 2014 was that the property fell through the gap between two kinds of buyers: landlords and upper-bracket homebuyers. As the seller told UrbanTurf, “the penthouse unit, being so large, does not appeal to a traditional multi-family buyer, and the many folks that wanted the penthouse did not want to be bothered by rental units.” (As the real estate saying goes, “fall in love with your pro forma [spreadsheet], not your project.” Oops.) The asking price has gone back up, after having fallen to $6.5M, and even at the lower price DC’s rent control limits the upside.

Suggested buyer: A boarding-house, perhaps run by a national cultural institute that wants to foster international artistic ties, or a particularly wealthy commune (er, co-living arrangement). As hinted above, the RF-1 zoning doesn’t permit subdividing the penthouse into smaller units by-right; it would have to be rezoned (a contentious process) and then major construction would ensue. But since the building was a school, there are unusual uses permitted under its zoning (PDF):

The penthouse could be reconfigured as an arts incubator with six resident artists (on 3+ month rotations), with its ample entertaining rooms reconfigured as shared studio/teaching/event spaces. If the penthouse truly requires $12,500 a month (the asking rate when it was put on the market in 2015) to pencil out, it’s a much easier sell as creative office space for $16/sq ft.

Or, with modest reconfiguration, the building could make a luxe university branch campus with offices and classrooms upstairs, and dorm rooms carved from the apartments.