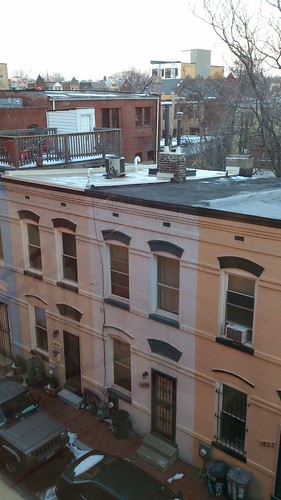 Would you pay $700/sq. ft. for this 2-bedroom alley house? Somebody did, paying 170% above its 2006 tax value. Sure, valuation growth like that isn’t sustainable, but what about our cities is?

You can if (1) demand grows just a bit faster than supply, or if (2) incomes are growing, or if (3) slightly more income can go towards housing — and certainly so if all three occur. Indeed, all three of these dynamics have sustained housing price inflation in gateway cities over the past generation.

This inflation has been politically possible because many existing residents (and thus voters) are sheltered from the resulting affordability crisis. Only a minority of people are exposed to housing affordability; most current residents are sheltered from price increases, having purchased or rented their housing at yesterday’s market prices. It’s pretty much only in-migrants who have to pay today’s housing prices, and since they’re migrants, they don’t vote. In-migrants are also a surprisingly small share of Americans: in any given year, fewer than 3% of Americans move across state or national borders.

1. Between job growth, smaller households, and natural growth, housing demand is increasing faster than population (and construction) in many metro areas. This has been the case in California for decades; the LAO’s 2015 paper estimates that since 1980 (my entire lifetime!), California has built 100,000 fewer units every year than it should, and yet (a) demand to live in California continues, although definitely abated; (b) prices have skyrocketed; (c) construction has added some new supply.

2. Median incomes nationally have been flat for the past generation, but macroeconomic shifts have led incomes in the richest gateway cities to soar (also see this Economist briefing). This is especially true at the top of the distribution, due to rising overall inequality. The minority of households that are exposed to high prices may very well be able to afford those prices in these cities, explain Gyourko, Mayer, and Sinai in their paper on ‘superstar cities’: “Recent movers into superstar cities are more likely to have high incomes and less likely to be poor, than recent movers into other cities… In short, residence in superstar cities and towns has become a luxury good. The cities’ increases in housing price appear to outstrip known productivity increases and the value of any additional amenities.”

Since only a small proportion of housing units trade hands each year (only 1-2% of households move into brand-new housing in any given year), “superstar cities” with rising incomes at the top and relatively few houses available see “new money” outbidding others for those few units, pulling prices up. Because house prices are based on comps, prices for other houses also rise. As Matlack and Vigdor write, “In tight housing markets, the poor do worse when the rich get richer.”

I know this seems insane, but income inequality has gotten so far out of hand that in many cities super-luxury housing is under-supplied, with tremendous consequences all the way down the housing ladder. There are over a thousand Bay Area households with million-dollar bank accounts for every single house that came on the market last year in Atherton, the choicest of Bay Area towns. Hence, house prices in Atherton have doubled in four years.*

3. Metro economies have evolved in lots of small ways to cope with higher housing prices at the margin. At first glance, “the poor will always be with us,” but in reality metro areas differ very substantially in terms of their economic makeup. Having moved from low-cost Chicago to high-cost DC, I’ve noticed that this slowly-accumulating, giant gift to high-cost-regions’ landlords has been cobbled together by squeezing a few dollars here and there from other sectors:
– Higher labor costs: the minimum wage here is about 15% higher, and high-labor-input services (like haircuts) cost substantially more here, because the staff earn more.
– A shift towards higher-wage work and reduced labor inputs (see #2 above). There are, of course, lots of well-paid jobs in DC; nearly half of households here earn over $100K. Many dual-income “power couples” who have no problem with the local cost of living. But there are surprisingly few on-site support staff for them, and instead there’s often off-site help. Even in labor-intensive industries like restaurants, on-site prep work can be minimized by relying on commissaries and distributors based in cheaper cities. (You can forget about Jacobsean “import substitution.”) Anecdotally, I’ve heard that employers are willing to make do with thinner staffing here than elsewhere.
– People work more; DC’s female labor force participation rate is 15% higher than Chicago’s.
– Housing itself can’t be substituted (everyone needs somewhere to live), but houses can be. People downgrade their locations or living standards, living in smaller or lower-quality housing units in less desirable neighborhoods than they otherwise would. They also “pay” for housing with long commutes, often from what are technically other metro areas.
– People borrow more. DC has more mortgages and higher student-loan bills than any other metro.
– People spend more on housing, and less on other goods and services. Brookings’ Natalie Holmes notes that the 20th-percentile unit in DC costs 48% of a 20th-percentile income, vs. 38% for a 20th-percentile individual in Denver.

That these coping mechanisms exist by no means implies that high prices are benign. From a local economic development standpoint, high housing prices don’t just deter potential employers, but also vacuum up dollars that could be more useful elsewhere in the local economy. Rent checks, unlike haircuts or restaurant meals, don’t have big job multipliers. As a Global Cities Business Alliance report puts it:

Citizens are spending money on accommodation that they would readily divert to goods and services if their housing costs were lower… the money ‘trapped’ in the housing market runs to billions… Unleashing this spending would in turn boost business revenues and create more jobs. Assuming that businesses were to channel all additional revenue into employment, we estimate that Beijing could generate more than 400,000 new jobs, Mexico City more than 200,000, São Paulo more than 143,000, and Hong Kong nearly 148,000.

* Chuck’s follow-up post posits that property owners are speculating on upzoning. This line of reasoning is beloved by so-called “SF progressives,” who relish pinning the blame for everything upon evil, greedy developers and the obnoxious “kids these days” who inevitably fill their apartments. Yet this densification/speculation theory cannot explain the skyrocketing housing prices that are at the very epicenter of America’s metro affordable housing crisis — in places that have zero multifamily growth and zero transit investment, but LOTS of high-wage jobs, like Atherton, Menlo Park, and Palo Alto in Silicon Valley, or Chevy Chase in Maryland, or the Hamptons. Atherton is the most extreme example: the town banned all multifamily housing and sued to stop transit, and yet house prices have doubled in four years.

Perhaps, instead of transit-oriented speculation, exclusionary, single-family-only snob zoning has left supply and demand imbalanced. Believe it or not, the demand for $3M houses in Atherton vastly exceeds the supply of $3M houses, so the $3M houses have been bid up to become $6M houses. I know this seems insane, but there are over a thousand Bay Area households with million-dollar bank accounts for every single Atherton house that came on the market last year.

There are also many fashionable urban neighborhoods where housing prices have spiraled even while housing unit density is declining: the demand for mansions is so high that humble apartment buildings get demolished for glamorous single-family houses. (Once again, life imitates the Onion.) This was even the case in my onetime home of Bucktown in Chicago, where the ward boss infamously handed out spot rezonings upon “request”; in theory, these could have been used to add units, but in practice the McMansions just got fatter.