Since the earlier edition of Idle Speculation was so popular, here’s another.

The area’s first Uniqlo will open today at Tysons Corner Center. Even though it’s throttled back its expansion plans in the USA, the Japanese apparel retailer says “it will continue to shutter unprofitable stores located in suburban malls and focus on opening more flagship stores in urban centres.” So now that they’re in this market, where could an urban flagship land? 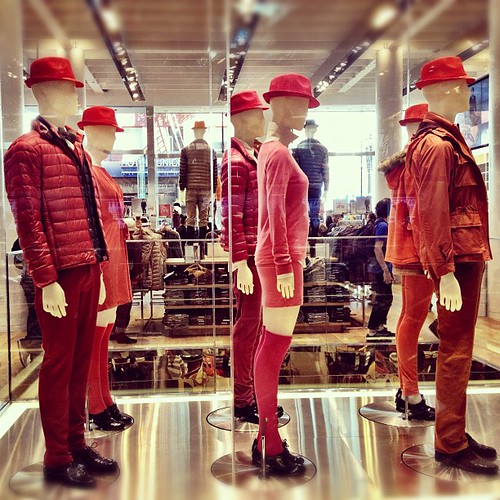 First, how large would the store be? The flagship on Chestnut Street in Center City Philadelphia has 29,000 square feet, mostly on the lower level. By comparison, the Denver Pavilions store (also opening this week) is only 17,000 square feet on two levels. Finding a space that large within downtown DC is tough, especially given that many of the office buildings there were built with office tenants, not retailers, in mind.

However, two storefront museums have or soon will vacate their spaces in tourist-rich area around Gallery Place. How do these stack up?

The more prominent location is the Spy Museum site at 800 F St NW, owned by Douglas Properties. 27,231 square feet will be available, directly opposite the Portrait Gallery and with a prime F Street address (down the street from J. Crew, Anthropologie, Zara, Ann Taylor, H&M, Banana Republic, and others), once the new spy museum opens in late 2018. However, the Spy Museum space has several strikes against it. Not only is it not possible to open a store until 2019, given construction timelines, but the interior was assembled from several rowhouses and thus has many partitions and level changes. While these are easily hid with a museum buildout, they’d result in a costly and complex renovation for a larger-format retailer who wants to keep sight lines more open. The leasing flyer seems to indicate that Douglas agrees, and would rather lease the space as four spaces ranging from 1,871 to 11,401 square feet.

Slightly less prominent, but perhaps more likely, is Terrell Place, the former Hecht’s department store at 7th and F (with Rosa Mexicano at the corner). The space vacated by the Crime Museum is now available, with up to 8,762 square feet available at street level on 7th St. What’s more important is that there’s at least 11,482 square feet available in the basement — potentially expandable to 52,751 square feet by shifting other stuff around the basement.

Which raises another possibility: there might be other office buildings in the area where vacant or underutilized basements or second floors could be added to small ground-floor spaces to yield 20,000 square feet. It used to be that landlords made all the money on offices, and only retailers selling steaks, sandwiches, sundries, or savings accounts were brought in to serve the worker bees. Now, downtown finally has the foot traffic to support real retail, and the supply is beginning to catch up.