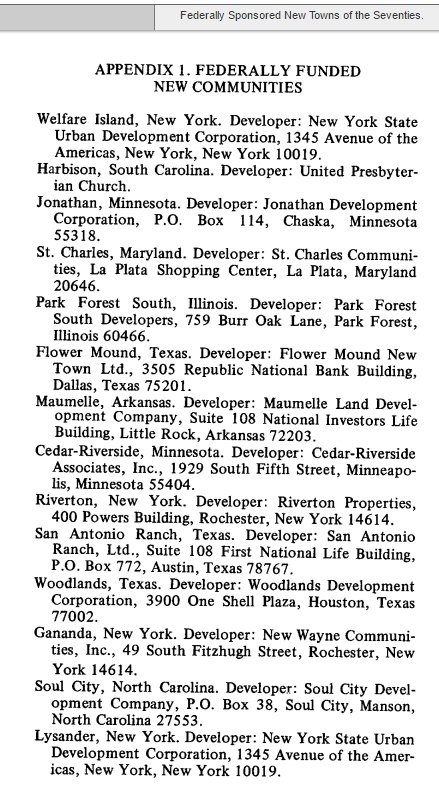 Earlier this week, startup incubator Y Combinator made a bit of a splash by hiring a lolcat entrepreneur to work on its “New Cities” program. The entire endeavor appears to be completely ahistorical. So, in an effort to help them out, here’s a reminder of the last time someone (the federal government) splashed out a lot of money to build cities from the ground up in America.

It’s worth noting that, 40-some years later, only The Woodlands has evolved into something resembling a city, with its own economic base — but probably due to its location in metro Houston, which sustained population growth of 20%+ per decade from 1970 through 2010. Several of the others remain half-built, pleasant-enough bedroom communities, and a few of them hardly ever got off the ground.

It turns out that city-building, and especially economic development, is an iterative, incremental process that’s highly resistant to shortcuts. Yes, economic booms do happen in unexpected places, but almost all of those are associated with large institutions and relatively unskilled labor. Re-creating the intricate economic interdependence of a 21st century metropolis will prove a monumental challenge, especially in an era of subdued labor mobility.