I was pondering the testimony I delivered last May to the HPRB: 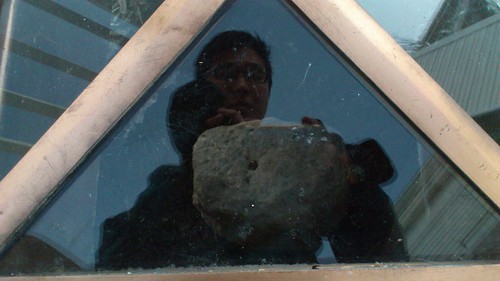 Global warming poses a grave and imminent threat to not only humanity’s future, but to our shared past as well. In a recent issue of Preservation magazine, National Trust for Historic Preservation president Stephanie Meeks wrote that “as preservationists, it is incumbent on us to reckon with climate change bravely.” If left unchecked, the higher sea levels caused by global warming threaten the very existence of countless historic structures within the District of Columbia, including a great many of the surviving structures from its earliest days. For example, the original cornerstone of the District of Columbia (at Jones Point in Alexandria) was originally constructed on dry ground — but now sits below today’s sea level, hidden by an obtrusive concrete seawall and visible only through a protective cover. From the Jefferson Memorial to Randall School, Mayfair Mansions to Tingey House, global warming could very well obliterate scores of DC landmarks.

(The HPRB approved the application that day, and the building is moving towards construction this year.)

The sad thing about my statement today? Global warming will go pretty much unchecked under the present policy regime. Points-of-no-return are rapidly approaching for the terrestrial ice sheets of Greenland and West Antarctica; even with the boom in clean energy technology, there’s no stopping sea level from rising several meters or even many meters. Ten feet, twenty feet seem matter of course now; hundreds of feet is within the realm of possibility.

Is everything that we’re fighting about within our low-lying cities about to go for naught — are we just rearranging deck chairs on the Titanic?

As Ian Urbina noted in the Times in November, property sales in flood-prone coastal areas are already slowing suspiciously. It’s impossible to know exactly why, but the rising incidence and cost of even “nuisance” flooding (as extensively reported by Ryan McNeill, Deborah J. Nelson and Duff Wilson from Reuters last year might well be causing people to think twice about purchasing in flood-prone areas.

What happens when the defenses start to run out? Will land suddenly, or gradually, become worthless? One fascinating “natural” experiment to watch is in Palm Springs, where the Desert Sun’s Rosalie Murphy wrote about the consequences of the expiring land leases that underlie half of that city. Condos are going begging for buyers, since expiring land leases can’t be encumbered with fresh mortgages — but commercial development often continues apace, since the mortgage terms are shorter.

I appreciate that the Trust is thinking more intersectionally, to the point of reframing its work as “reurbanism.” But given the forecasts, it’s tough for me not to see a lot of local skirmishes over waterfront sites as pretty pointless.