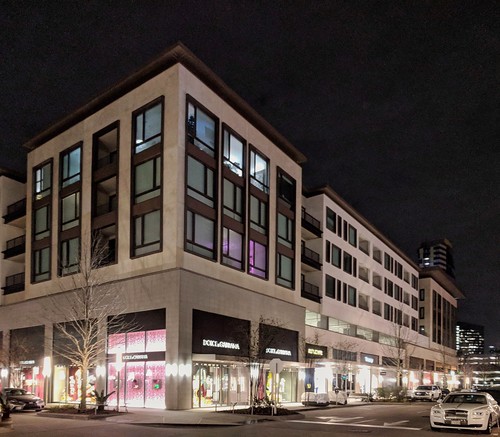 As of 2015, the IBC now permits multi-story concrete podiums. At first, this was mostly of interest because it permitted even taller “double podium” apartment buildings, with up to eight stories framed mostly in wood.

This diagram (by Nadel, Inc. for Multifamily Executive) shows the effect between The Podium and The (Double) Podium: you can squeeze an additional floor in above grade, and because it’s concrete (heavy line) it can be used for residential, retail, or parking.

Yet using that magical concrete-framed second floor for residential (which could just as easily be wood-framed) seems like a bit of a missed opportunity. Instead, the second floor could be a mezzanine parking level for the wood-framed residential above — as was done in the mixed-use Grey House at River Oaks District pictured above, or in this mixed-use development on LA’s Olympic Blvd.

The real breakthrough possibility for the parking mezzanine isn’t atop retail, though: it’s atop yet more parking.

It just so happens that a 65-75′ wide module fits either a double-loaded apartment building or a double-loaded parking aisle. Therefore, a four-story building (three floors of Type V residential, one level of parking) can be stacked atop an existing aisle of parking — without diminishing the existing parking lot, and without excavating any parking.

It’s the suburban infill version of “have your cake and eat it, too”: keep your parking and add infill housing, too. 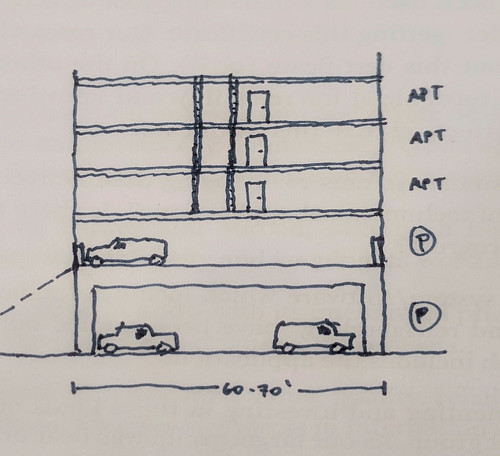 Developing these air-rights infill parcels used to require some pretty tremendous trade-offs. The first such projects that I saw were designed by Gary Reddick, a Portland architect who won a CNU Charter Award in 2004 for two such projects. Jury chair Ellen Dunham-Jones subsequently wrote about these in HDM:

In Seattle and Portland, where there are very good markets for residential development, Sienna convinced a variety of non-residential building owners to sell the air rights over their parking lots or roofs for housing. In Portland’s desirable and compact Northwest neighborhood, Sienna saw the parking lot of a specialized medical center as a potential housing site. After producing a pro forma, the firm approached the owners and showed that it could provide them with a covered, forty-three-space parking lot (with only three fewer spaces than before) and a million-dollar profit in exchange for stacking an additional layer of parking (with a separate entry) and two stories of condominiums. The built project, Northrup Commons, screens the parking with duplexes entered from the streets and adds two floors of apartments.

This turns out to be tough to replicate elsewhere. Because the residential comes with its own parking requirement, fully replacing the on-site parking requires adding parking somewhere else — either building a new parking lot elsewhere, or digging underground, at super-high cost ($11 million at one Seattle project). Most of the Sienna projects, including Northrup, used sloping sites (common in the Northwest) to tuck one parking level partially or fully underground. 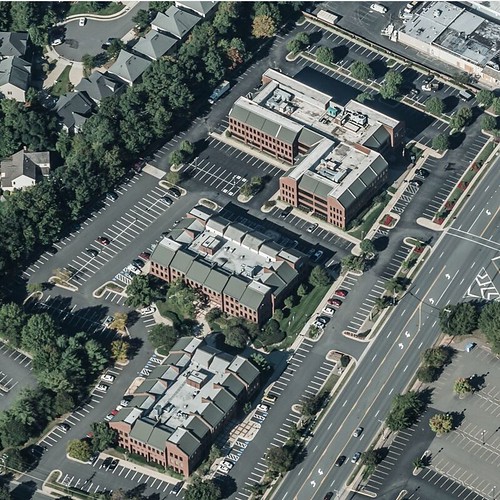 Since the resulting buildings would block visibility and doesn’t result in an active ground-floor frontage, this particular infill seems best for infilling around Class B offices that currently sit adrift in a moat of parking — such as the above complex on Old Courthouse Road, at the southern fringe of Tysons Corner (image from Bing Maps). Or, many properties along this stretch of the infamous Executive Boulevard near White Flint (image from Google Earth):

* A rough assumption here is that each 1,000 sq. ft. apartment would have one parking space, which works out to about 3:1 residential:parking floor space. The ratio seems to work for the Houston example, which promises its residents the ability to park in-building rather than having to venture outdoors. Sufficient parking for rich Houstonians is probably enough for anyone.

One thought on “Idle speculation: podium apartments, floating above a parking lot”