Last September, I pointed out that the Amazon HQ2 RFP was almost entirely about site readiness and talent. On the latter topic, one excellent resource was a 2017 report from commercial real estate broker CBRE that ranked metro areas based on “tech talent” — the number of people employed as “software developers and programmers; computer support, database and systems; technology and engineering related; and computer and information system managers.”

Not too surprisingly, eight of the top 10 from that particular ranking ended up as finalists for Amazon’s HQ2. The other two are Seattle (HQ1) and the Bay Area, which is currently Amazon’s second largest location. 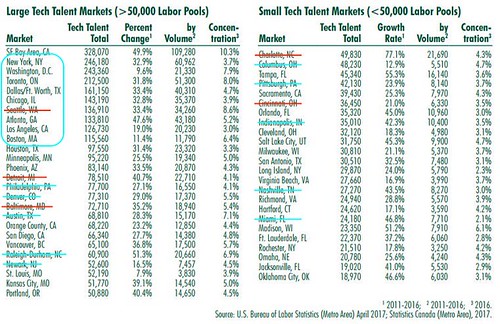 Top 10 (minus SF) circled in blue; cities officially ruled out for talent reasons in red; shortlist cities with even smaller talent pools ruled out in blue. Source: BLS, via CBRE.

A single theme keeps showing up in the “thanks, but no thanks” feedback interviews. “Talent was the most important factor out of everything they looked at,” said Ed Loyd of Cincinnati. Charlotte’s “pool of tech talent is lacking compared to other markets.” “We weren’t good enough on the talent front,” said Sandy Baruah of Detroit. Amazon “really emphasized that they put a high weighting on talent,” says Mary Moran of Calgary. “Talent that could be hired immediately… ‘it was clear from the earliest stage of the RFP that it was the top priority,” says Tom Geddes of Baltimore. The feedback got more specific in one instance: “Prince George’s county doesn’t have a large enough pool of senior-level software engineers.” 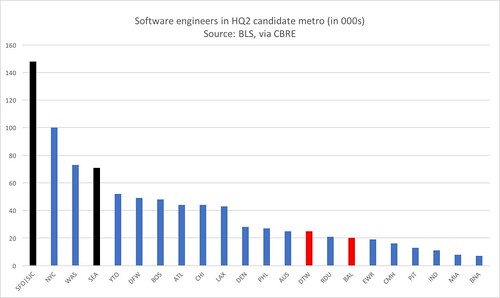 HQ2 candidates are in blue, Seattle and the Bay Area are in black, Detroit and Baltimore are shown in red. Click to enlarge.

There’s a substantial gulf between the top 10 and the latter 10, with Los Angeles having about 50% more local programmers than Denver. More importantly, if Detroit was rejected because they don’t have enough programmers, how can Philadelphia or Raleigh say otherwise? This puts the smaller labor markets on the shortlist at a steep disadvantage. Only Newark can make a case that it could pull commuters across the Hudson (though not for long).

Shallow talent pools also explain why “turnaround” sentiment wasn’t enough to save bids from Rust Belt cities. The only Midwestern cities that made the cut are either Sunbelt-era cities that happen to be north of the Ohio, like Columbus and Indianapolis, or the classic turnaround success stories of Chicago and Pittsburgh (even if both have deeper post-industrial legacies than the coastal cities).

A bit less confidently, recent large office leases in Boston and Manhattan are probably best thought of as consolation prizes, given that the locations chosen don’t have much in the way of expansion options. Leases being negotiated now would reflect planning work that was underway before the HQ2 search got going. [Update, 1 May: not alone on this reasoning.] Recent warehouse and data center leases or openings, of course, have zero bearing on future office locations.

The Boston move also has implications for cities 5-10 in the above chart, all of which have ~45,000 programmers. Quality of local talent is also important, and proximity to MIT gives Boston an edge over others in this group. If Boston and NYC are only worthy of consolation prizes, who’s left?

Hint: it’s also the metro where not just the number of programmers most closely matches that of Seattle’s, but their skill sets do, too.