I am a homeowner, in a historic landmark building. I have been a National Trust member for my entire adult life, and have spent almost all of that time living in National Register-listed buildings. I consider myself an ardent preservationist.

It therefore pains me to say that the historic preservation process in DC is broken — as I have recently documented in Greater Greater Washington. The District has designated almost as many historic structures as New York City, which has 6.4 times as many total structures. Thousands of unremarkable buildings such as production-built rowhouses and strip mall parking lots, almost identical to thousands or even millions of others around the country, have been deemed by HPO and HPRB to be “locally significant” for seemingly no other reason than the fact that they exist. 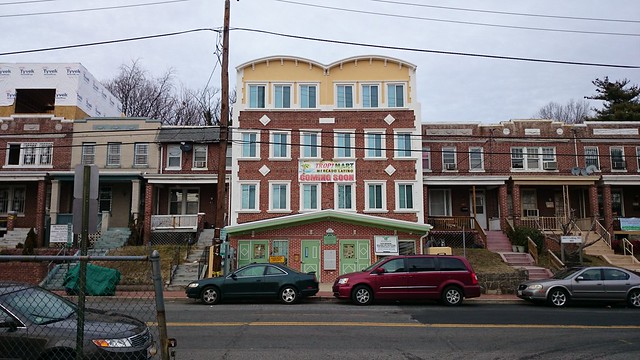 Kennedy Street is a rare rowhouse corridor that’s still allowed to evolve with new structures, instead of being frozen in amber by overzealous historic preservation

I became a preservationist because I am pro-urbanism, and want to maintain the rich urban fabric of small-scale buildings, evolved over generations, that was common in pre-WW2 America. It is dispiriting to see that NIMBYs have hijacked the historic preservation process to stop that very process of urban evolution that created the places they claim to admire.

Instead of pouring all of its resources into finding more and more mediocre buildings to designate as “locally significant historic resources,” HPO should instead halt the process of reviewing outside nominations and focus its efforts on a comprehensive, District-wide survey of structures to identify those of high historic and aesthetic merit. Los Angeles has eight times the land area of DC and six times as many buildings, and completed a full survey of its structures within eight years. Meanwhile, DC HPO is now 40 years old, and has not completed a District-wide survey — ignoring many potential treasures in overlooked neighborhoods, while lavishing time and attention to ensure that no detail is overlooked for every single building in the District’s prosperous quarters.

Historic preservation also should not triumph over other aspects of the Office of Planning’s remit. The District has other planning priorities besides preservation, including creating affordable housing, allowing more people to live and work near transit and the regional core, and increasing renewable energy production. HPO and the HPRB must find ways to balance their own mandates with others’.