Two recent geographic visualizations that describe my little corner of the District (and world):

First, MIT’s Media Lab, via their YouAreHere site, generated this map of the fastest mode of transport from my neighborhood to the rest of the city: 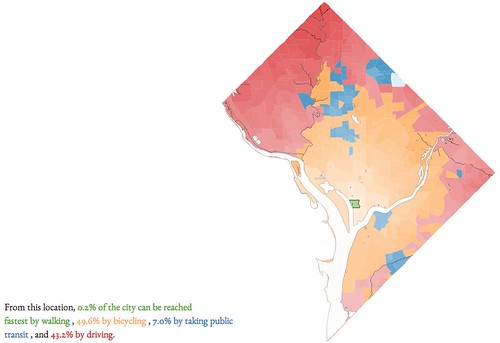 Indeed, this more or less describes my travel decisions: I’ll bike anywhere in the L’Enfant City (where most attractions are) or along the rivers, take transit if going along the Green Line or to Silver Spring, and don’t really bother with the edges of town (including Upper NW).

The highest “percent of the city that can be reached fastest” by bike that I found was 62.7% of the city, from Stanton Park — but for most of the L’Enfant City and Mid-City, bicycling is the fastest way to get to about half the city. For transit, it’s 27.6% from Metro Center. Yet from most of the edges of the city (whether Ward 2, 3, or 8), cars are sadly still too convenient; 80%+ of the city is most quickly reached by driving.

A sad testament to the relative lack of speed of transit in Chicago: even from downtown, only 2% of the city is most quickly reached by transit.

Second, there’s this interesting “cross-section” visualization from Luke Juday at UVa’s Demographics Research Group, which underlines the increasing self-segregation of young people within the urban core:

No, the percentage of 20-somethings in the urban core didn’t appreciably increase. However, since the region’s population is now older, the core’s percentage went from 50% higher than the metro average to 100% higher, as 20-somethings have deserted the suburbs and piled into the urban core. The only area that gained 20-somethings is the near east side of town, which is a theme that the post’s other graphs explore.

And yes, the latter phenomenon just might have something to do with the transportation characteristics outlined in the former.