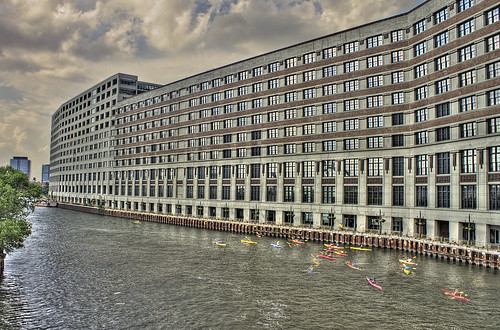 Some of the loft condominiums within the former Montgomery Ward Catalog House, where one penthouse unit sold last October for $2.95 million, were set aside as public housing replacement units.

When I was working for the Chicago Rehab Network 11 years ago, I wrote up the broad outlines of what was eventually adopted as Chicago’s IZ policy. (It’s on the last page of this quarterly memo to the city’s Department of Housing.) I certainly concur that it is not going to solve the affordability crisis in Chicago anytime soon, but I still think it’s a reasonable approach to providing workforce-level affordable housing within the context of how Chicago builds housing — and once it was implemented, IZ multiplied the number of affordable units that Chicago’s Department of Housing could take credit for (primarily through LIHTC).

During the process of drafting this policy, we anticipated and understood that IZ would absolutely not be a cure-all, regardless of how future politicians would try and take credit for it. Furthermore, as Alex Block points out in a comment to the post, IZ absolutely does attempt to do two, contradictory things: (1) integrate gentrifying neighborhoods by creating new, permanently affordable units and (2) creating as many units as possible. [Yes, permanently affordable: IZ units in Chicago are enrolled in a land trust.]

Since CRN is a coalition of CDCs, almost all of whom work exclusively in poor neighborhoods, the CDCs stood to benefit more from approach #2, and so the law probably errs in that favor. Even CRN’s members who worked in fast-gentrifying neighborhoods, though, would rather have served two families in Oakland than one in the South Loop, and the cash-out provision allows them to do so. I certainly don’t blame them, even if the net result does to a small extent perpetuate socioeconomic segregation.

As part of the process of creating this legislation, we conferred with developers of both low-rise and high-rise units, who shared their pro formas with us, and with very extensive research done by groups like MPC and BPI, mostly relying on established policies in primarily low-rise places like Montgomery County, Md. and Burlington, Vt. We saw very few examples of successful policies that worked in a high-rise context. And since a large share of the development in Chicago, then as now, was in downtown high-rises, we needed to find some way to get buy-in from high-rises.

In short, affordable units within high-rises turn out to be very difficult to create and administer. High-rises are costly to build per square foot, and there isn’t much latitude to trim the costs through things like unit sizes and finishes. Most crucially, high-rises are subject to  numerous cost thresholds, beyond which the primary incentive of IZ (“free land” in the form of higher density) can become worthless — e.g., a 7-story building is actually far less profitable than a 6-story building. Their incredibly high per-square-foot construction costs, usually fairly generous FAR limits, and low ratio of land-to-hard-costs make the prospect of bonus density (=free land) far less enticing than in suburban contexts.

And once a high-rise is completed, it’s difficult to balance the operating costs of luxury amenities (concierge, pool, etc.) across market and affordable units, which has recently been in the news with the “poor door” controversy. (This is somewhat less of a problem in MoCo, since the Washington area’s very high AMI allows for luxury studio apartments to be counted as “moderately priced dwelling units.”)

So, given these difficulties — and given the CDCs’ thirst to capitalize a housing trust fund that could significantly expand their efforts at helping low-income families in neighborhoods (rather than moderate-income singles downtown), we went with the “cash-out” provision that pretty much exempts downtown high-rises.

As for exempting small developments, that’s solely related to the fact that the requirement kicks in based on the number of units, and it’s impossible to deliver a fraction of a housing unit.

5 thoughts on “Why inclusionary zoning has a cash-out provision”