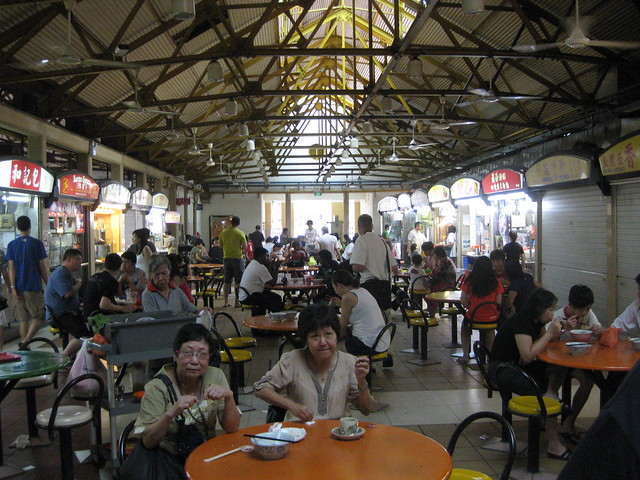 A case study (quite literally) about the struggle to maintain authenticity through small-scale retail operations is profiled in this week’s Economist. In Singapore, the government somewhat inadvertently nurtured one of the world’s most exciting food cultures through its “hawker centers.” Anthony Bourdain explained their history in “The Layover“:

The hawker centers of Singapore were a shrewd strategy to incorporate and control what was once a chaotic but pervasive culture of street carts. To control the health, safety, and traffic aspects, vendors were brought inside these covered structures still open to the air, but in stalls with regulated running water, refrigeration, and strict rules of food handling.

The main problem is that Singaporeans have grown used to paying prices that the market can no longer bear… The government, says Dr [Leslie] Tay, “has committed to providing cheap food for the masses”. With tiny flats and cramped kitchens, and with the number of two-working-parent families steadily rising, plenty of Singaporeans count on hawker markets for their sustenance. But with the first generation of hawkers retiring and their replacements paying market rents, food prices will certainly rise.

And as the masses change, so will the food. Some Singaporeans lament that a recent influx of immigrants from northern China has made their traditional Teochew or Hokkien [ethnic groups from southeastern China] favourites harder to find.

The article arose from a blog post by Dr Tay where he recommended instituting non-market mechanisms for allocating space in the government-owned markets: “Wouldn’t it be great if the officers can just recognize his status as a Heritage Hawker and help him get a stall at pioneer hawker prices?” (Pioneering stalls were subsidized in an attempt to entice hawkers off the streets, and today those rents are 90% below market rate, according to the 2015 case study by Tan Shin Bin for NUS’ Lee School.)

Indeed, but would you necessarily trust a government to make good decisions about what constitutes “good food”? Perhaps not, but plenty of America’s most successful public markets (like those in Milwaukee and Seattle) are run by nonprofits. An early effort at a nonprofit hawker centre in Singapore failed, but the government has signed new management agreements with cooperatives and “social enterprises,” as recommended by a 2012 panel.

A prior experiment in renting out a hawker center to a for-profit operator failed, and won’t be repeated; Minister Vivian Balakrishnan, whose ministry runs most centers, maintains that “Hawker centres are social infrastructure – and not an opportunity for property speculation or rent seeking by commercial entities.” Instead, nonprofit managers will get the opportunity to reinvest surpluses into social development and entrepreneurship, and prioritize operators that provide affordable food and heritage cuisines.

As Singapore’s experience indicates, the answer probably lies with the social enterprise sector. How could those be structured? One potential answer’s coming up.