A few thoughts on a CNU 23 presentation by Russell Preston and Matt Lambert about their ongoing work on defining and fostering authenticity within New Urbanist places. Other thoughts will be forthcoming, as I write them up. 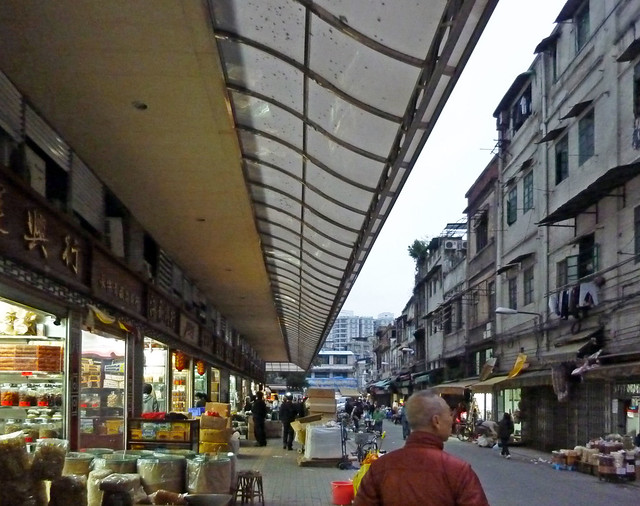 Do design and development really disrupt enduring neighborhoods? This block in Guangzhou, China, changed tremendously, but in some ways didn’t change at all.

1. Role of design
Flexible, adaptable buildings allow uses to change in their natural cycles. Crucially, notoriously fickle uses like production and retail must be given room to adapt. Not only do shop concepts and merchandise change, but the volume of these uses needed rises and falls with economic cycles. Tactical urbanism has shown us that design details may not be quite as important as broader questions of scale and program. Such a “stage set” approach may be especially appropriate in an era where programs frequently change.

2. Small scale
To the extent that smaller, more “honest” enterprises can be designed around, perhaps the best physical model relies on creating adaptable space along many smaller frontages — a fractal approach, as it were. More marginal businesses have long turned to side streets and passages to be near, but not in the middle of, the retail action.

Another CNU 23 session, ostensibly about pedestrian malls, featured examples of pedestrian-only ancillary passages where smaller retailers thrive just off Main Street. Beth Anne Macdonald spoke about Division Street in Somerville, N.J., where commerce has thrived after the street was turned into a pedestrian mall in 2012. Division (like Bethesda Lane, which Tim Zork presented at the same session) was intended as shared space but ended up being car-free 24/7 — a testament to that type’s tremendous flexibility. Despite its Spartan design of concrete and streetlamps, Division is thoroughly programmed year-round. 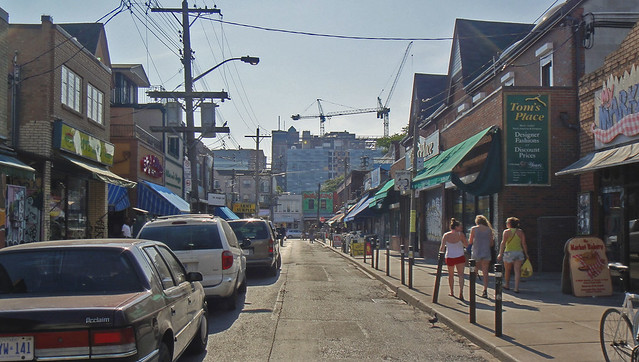 Kensington Market in Toronto has a built environment that’s a terrible jumble of everything, but it gets the scale — and thus the feel — just right. It’s car-free on summer Sundays, thanks to gates that cost just $180,000.

Similarly, I’m setting up a walking tour in October of how retail is thriving away from the main streets in Georgetown, along its alleys, side streets, and the pedestrian-only C&O trail. The neighborhood’s historic scale — its small blocks and small spaces — and relatively flexible zoning permits this natural shift between uses. That these processes can work illustrates two chapters in “Death and Life”: small blocks and aged buildings.

Of course, financing these spaces can be a challenge. Yet this country is plagued with throwaway retail space, much of it ancillary to upstairs office and residential. Whether the ground floor of an apartment complex is given over to “amenity space,” or to small retailers who may or may not reliably pay rent, shouldn’t be of much interest to the bankers — and, arguably, many of the apartment tenants might well prefer the latter! Designing the public and private spaces with the flexibility to accommodate whatever uses might be demanded could prove a greater challenge.

At the Louisville NextGen meeting, the one example of a new-construction informal street market that I could think of was a set of buildings in Downtown LA’s Fashion District. They appeared to have been built largely as paid parking garages, for which there are many local comparables, but had clear-span ground floors to accommodate small wholesale clothing retailers. It was awesome.

3. Policy and non-market structures
Market prices for prime space in gateway cities have — due to high outside-investor interest — reached heights that stifle innovation and organizations that evaluate their impact in primarily non-market means. Furthermore, not all institutions are lucky enough to have purchased their property “back when it was cheap.”

The 5M model (final program & renderings) has promise — identifying “community anchors” more broadly than just non-profits, offering free or discounted space to these community serving entities, and profiting by selling ancillary services. The other innovation is that this project’s pro forma has been turned on its head: the community space is accepted as a given at the starting point, and the market-rate buildings sized accordingly. (Since every development in San Francisco is discretionary, you might as well ask for the moon.)

But what about the next community that comes along? Will tomorrow’s fresh ideas and institutions have similarly protected spaces? Is this model flexible enough to accommodate new institutions, or shifting missions among the existing institutions? Rather like rent control, this approach privileges those who showed up at the right time, excludes newcomers — and leaves the question of capital renewal unanswered. Could a similar space, like [innovation] District Hall, be continually refreshed with new concepts and competitions on a regular basis?

(We had a detailed conversation about a potential corporate structure to ensure long-term community affordability on the following day. Notes about that conversation are forthcoming.)

4. Chinatowns, new
At least some suburban communities have successfully retrofitted smaller scale uses into strip-mall suburbia: the “ethnoburbs” that Asian immigrants have settled across North America. Even shiny, new buildings still foster small businesses, due in part to high density, tiny footprints (see above), management that understands the business models, and perhaps other factors that could be identified. 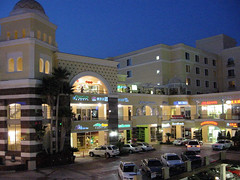 These retail centers can be built in a more transit-oriented manner; the vertical malls cropping up around Flushing have a mind-boggling spatial complexity. The vertiginous skyscrapers of Hong Kong, clustered around mass transit, have organically evolved 3-D pedestrian networks so intricate that they defy description, but which host all sorts of authentic communities.

5. Chinatowns, old
These neighborhoods appear to maintain a remarkably stable level of economic diversity — of activities, of economic groups — and appear, from the outside, to have stable populations. Yes, some of this stability is real, and partially results from capital that gets locally recycled, through local institutions.

But what looks like stability from the outside also hides considerable turbulence under the surface. There’s constant upheaval among the community’s participants, as high in-migration balances out community members “lost” to assimilation. By and large, assimilation (as institutional racism declines/morphs) has undermined most of American cities’ other mixed-income ethnic enclaves, but since Han Chinese easily outnumber every other ethnic group in the world, there will always be a inflow of migrants — or will there?

Another less-than-replicable factor behind Chinatown’s staying power is a lack of effective enforcement (“It’s Chinatown, Jake”). Thus, things don’t quite happen to code; it’s cheaper, but somebody might get hurt. Whether that trade-off is worthwhile is your judgment call, but it does illustrate that over-regulation might be a factor in driving high costs.

6. Community change and the word “authentic”
It’s worth thinking through a bit more about how “authenticity” (see this discussion by Sharon Zukin) like any other aspect of community character, will move in cycles. Every community changes its participants, and is changed by its participants. The people who come after us have different experiences, and what we do shapes how they understand the world around them. This feedback loop can either result in a virtuous, or a vicious, cycle.

The pace of change also matters. Change is literally a fact of life, but violent upheaval is rarely welcomed. Many communities today are upset by the roller-coaster ride that property markets have put them on, with prices rising much faster than social infrastructure can adapt.

What appears authentic and novel to us will seem workaday and fake to someone else: If I cooked one of my grandfather’s recipes for you, you’d see it as “authentic” and he’d see the exact same dish as “fake.” It’s exactly that interplay, exchange, and evolution that makes cities — and especially American cities — such interesting and exciting places. It’s a tough edge to surf on, to simultaneously embrace and resist change, to honor established practices while inventing new ways, but it’s a worthwhile endeavor.

3 thoughts on “CNU conversations: Can we build authentic, small-scale communities that subtly adapt to change?”