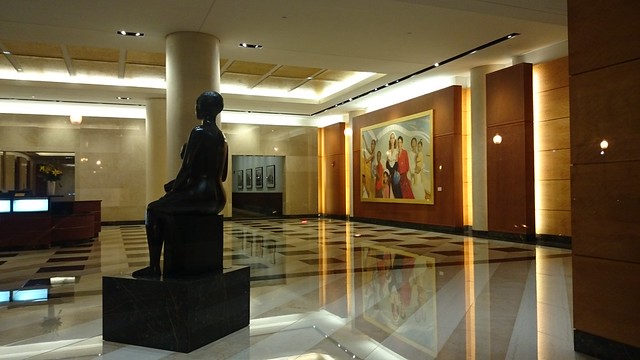 In the Penn Quarter neighborhood, as Mark Jenkins wrote in the Washington Post, “arts spaces are mandated by zoning, yet the arts scene is hard to find. Nearly a dozen exhibition spaces populate the area… most don’t have access to the street and aren’t clearly identifiable from outside. They are in lobbies or tucked away in office building interiors.” Here’s one, Terrell Place at the prime corner of 7th & F, that’s not entirely hidden — but also not exactly shouting its noble story to the public. Yet it’s somewhat striking in that it wastes what could be prime retail space across from the National Portrait Gallery and the Verizon Center arena.

The “arts” designation for the “Gallery Place” neighborhood was intended to foster a vibrant community of commercial art galleries alongside working artists, all in the shadow of the Portrait Gallery. Yet instead, there are scarcely any commercial galleries, which require considerable staff investment, and instead many pointlessly large office building lobbies which feature above-average displays of plop art. Perhaps some lawyers and lobbyists have their lives slightly enriched by walking past these paintings, but the general public now derives scant benefit.

The designation is so broadly written that at least two suspiciously spacious bars on E Street — Penn Social and Hill Country Barbecue — both owe their existence to the “arts” requirement. I’m glad that Penn Social has room to spare; it’s a reliable go-to for large events that might not otherwise fit into such a convenient downtown location. But was that really the intent of the zoning?

The situation illustrates the difficulty of trying to define great places, which depend upon a lot of “we know it when we see it” subjectivity, through legal means like zoning. Now that quality retail has emerged as the prime placemaking amenity — anywhere can have open space, but retail’s a lot more difficult — it’s also become something worth subsidizing for its placemaking value. Yet before you can subsidize something, you have to define it.

Doing so will be fiendishly difficult for public entities like municipalities, which will also run into arguments about whether retail is a public good or a private good. However, it should be easier for private entities seeking to cross-subsidize across revenue streams.

One thought on “Friday photo: Be careful what your zoning asks for”