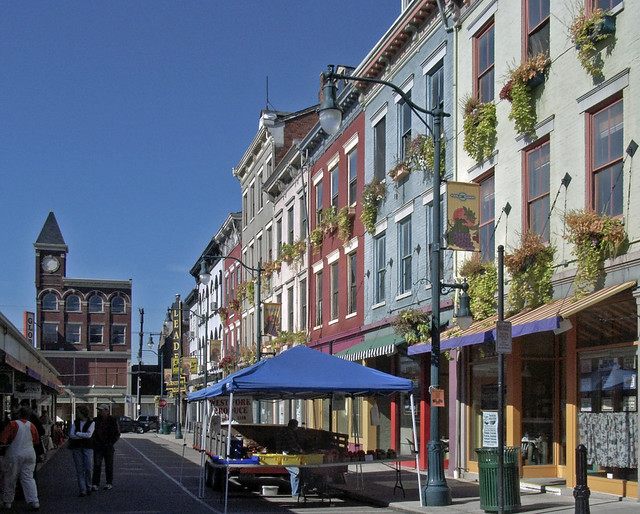 Findlay Market in Cincinnati, where a nonprofit market manager and CDC are working alongside private developers to create a mixed-use destination based around small, local shops.

Our earlier lunchtime conversation in Dallas quickly morphed into some constructive criticism of the community development field. We’re doers, so we delved into some of the mechanics of how a community could control its destiny, and ensure affordability over longer time scales.

In theory, Community Development Corporations have tremendous capacity to manage community change, but even where good CDCs exist — as in Boston and Chicago — their efforts are often quickly overwhelmed by the monstrous quantities of capital involved in gentrification. CDFIs were started to help leverage greater sums of capital, but never quite seemed to move beyond a little niche.

The work that community development organizations do is so labor-intensive that it doesn’t end up being very scalable. Some of that is good — community organizing and small-scale development in disinvested neighborhoods is tough. Some of that is bad — there’s so much bureaucracy involved in securing grants or tax-credit financing (or securing property for a Community Land Trust), and in complying with restrictions on spending that money, that staff capacity gets stretched thin.

(As a side note, why don’t we at CNU talk more often with the community development sphere? Sure, there’s some buy-in when individuals from CDCs get invited to present, but otherwise there’s scarcely any overlap. Perhaps siloization is to blame: CDCs/CDFIs have their own conferences, their own language, their own processes.)

Yet surely there are other vehicles that can provide a middle ground of financing for community development. In a gardening analogy, LIHTC-funded, CDC-built subsidized housing is like a trickle of water from a hand-carried watering can, and Wall Street money is like turning a fire hose onto your flowerbeds. Surely there’s some happy medium: a way to use local capital within a neighborhood, to fund incremental, community-positive projects that make a solid but uneventful return, over the long run.

There’s recently been a lot of renewed buzz about low-profit corporations and B-corps. Richard Plunz’s magisterial history of New York City housing shows us that many of the most innovative efforts at community-building there stemmed from just such endeavors, many underwritten by philanthropists or unions who sought investments with steady returns.

We discussed some of the innovation going on with cooperatives — the most established of low-profit, broadly-owned corporations. I talked up some experiments in the Upper Midwest, like the River West Investment Cooperative in Milwaukee, the considerable excitement around the Northeast Investment Cooperative in Minneapolis, and efforts to minimize business displacement along the Central Corridor light rail. In both cities, local capital is fostering communities of cooperative businesses in “emerging” neighborhoods. And unlike the Mondragon cooperatives, these coops are focusing on serving neighborhood needs, rather than exporting. Nationwide, a few credit unions (like Self-Help in North Carolina) have built substantial commercial-lending businesses, even in real estate.

But as much as we liked the idea of cooperatives, not everywhere has the fertile legal or cultural setting of Minnesota or Wisconsin. While cooperatives are great for certain kinds of businesses, they’re not for everyone: They can raise modest sums of capital, but struggle with large sums; their structures aren’t always flexible enough to accommodate multiple capital classes; their plodding, consensus-based nature makes them resistant to entrepreneurs’ bold ideas. Big-money equity investors (aka venture capital) are critically important to getting small businesses going, and are rewarded with high returns and an outsized say in governance — neither of which can be accomplished with a co-op’s flat structure. 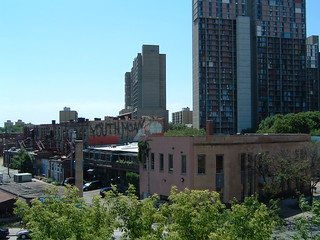 The history of Minneapolis’ West Bank neighborhood is an instructive example of co-ops’ promise and limitations. Uniquely among the ’60s hippie havens, federal urban renewal was leveraged to place most of the neighborhood’s housing stock within limited equity co-ops or Section 8. Alas, idealism and local control proved unable to adapt to either obsolescence or succession [PDF]. Photo: Michael Hicks, via Flickr.

Co-ops are a proven success within steady markets that provide community necessities, like workforce housing or groceries or child care or bike repair or bakeries — but perhaps aren’t the best vehicle for more colorful businesses. In many ways, commercial real estate development is just such a business.

Which brought us to the big small-business finance innovation of recent years: crowdfunding. Numerous “community investing” vehicles have been floated, like direct/P2P lending, lending through community financial institutions, conventional Kickstarter-style rewards (perhaps with interest paid in-kind), equity investments, etc. Crowdfunding has become almost de rigeur in certain popular, high-growth businesses. It first swept thin markets for trinkets that would typically be distributed online — e.g., board games. As the dollar amounts have grown, and as regulators have gradually warmed to the idea, platforms specializing in more capital-intensive bricks and mortar projects have sprouted for sectors like breweries and restaurants. Business models that defy categorization, like the McMenamin’s brand of alcohol theme parks, might be particularly well-suited to crowdfunded equity.

Several new platforms have emerged within this space. I’m most familiar with Fundrise. It’s evolved its primary offering away from common equity investments and towards what it calls “project payment dependent notes,” a hybrid of mezzanine debt (it’s debt, with a promissory note) and preferred equity (even though there’s a pre-determined target return, dividends are only paid when there’s adequate cash flow). For small developers, crowdfunding — even in the currently half-baked, accredited-investors-only form — holds significant advantages, namely cheaper, slower money, plus broader community buy-in.

Interestingly for our purposes, at least one nonprofit community development institution has begun to use Fundrise as part of its capital stack, and in particular in an attempt to save a for-profit community institution. The San Francisco Community Land Trust used Fundrise to raise its 38% equity stake (a local nonprofit offered the other 62% as equity) in an attempt to buy a mixed-use building housing the nation’s oldest African American bookstore, in a neighborhood otherwise ravaged by urban renewal. (Alas, the attempt foundered when the landlord changed the offering price.) All that the city could do was to landmark the building, perhaps in an attempt to reduce its market value, and to offer the business inclusion on a “legacy business” roster.

Mezzanine debt seems to also be the sweet spot for small business-oriented lenders like ZipCap. Their business model mirrors the built-in customer base of a cooperative, “recruiting an ‘Inner Circle’ of customers who pledge to spend a set amount of money in a fixed period of time.” Instead of relying upon just that circle for funds [as a co-op would do with equity memberships, or Member Loans], ZipCap uses those pledges as collateral for outside loans.

Combining all of the above vehicles — not-for-profits, low-profit cooperatives, and crowd funded for-profits — into interrelated entities might solve the scalability problem by allowing each entity to contribute its own strengths to a capital stack: 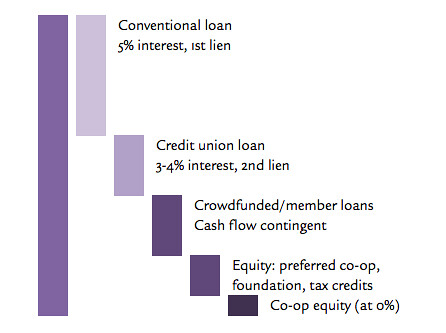 We called this entity a Place Corp, which has the ability to construct a capital stack from various tranches of capital, while keeping control within the community. (Outside investors and developers can help to build pieces, with the Place Corp hopefully maintaining some control via equity, but are treated merely as means towards an end.) Investors can choose from a wide variety of risk/return combinations, and can invest either time or money, choosing negative returns (gifts, grants), zero return (co-op equity), or modest returns. The Place Corp is diversified across property types, but not in location — like the family firms or community banks of yore. The durable, long-term returns of placemaking will create financial rewards for some investors — but for most, the place itself will be the return.

Next in the series: Where? And what sort of services might a Place Corp provide beyond just financing?

Thanks to some of those who contributed to this series of conversations: Karja Hansen, Matt Lambert, Russell Preston, George Proakis, Padriac Steinschneider, Seth Zeren