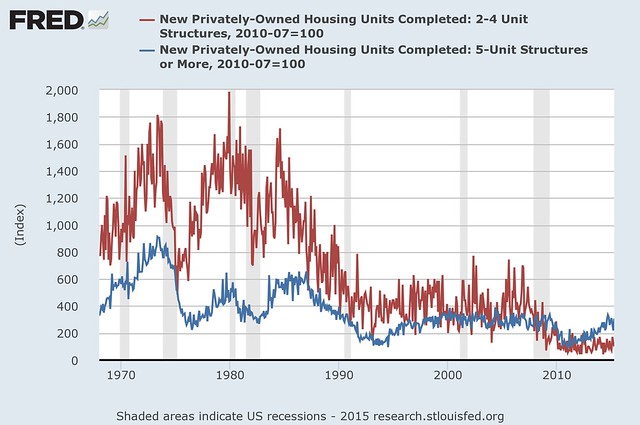 “Missing Middle Housing” refers to a broad spectrum of smaller-scale multifamily building types that occupy the middle ground between single-family detached and large apartment buildings. At its edges, the term can cover rowhouses and 5+ unit apartments, but in my mind, the core of the “missing middle” are “plexes” — two, three, or four flats on a single city lot. Small apartment buildings like these line the side streets of most of America’s walkable urban neighborhoods: two- and three-flats in Chicago, Polish flats in Milwaukee, three-deckers in Boston, or brownstones in New York.

Census data show that 2-4 unit buildings have almost evaporated over the past generation. As recently as the early 1970s, over 1/4 of multifamily units built were in small buildings. Now, it’s only about 4%.

Despite the steep mid-1970s recession, over 10X as many units were built in small multifamily buildings as today. In boom years, 14X as many were built. It was during the Reagan era that these buildings broadly fell out of favor.

2-4 unit buildings have been a relatively small share of all multifamily construction in the postwar era. Since the 2008 recession, they’ve practically disappeared — with only a few thousand units built nationwide every year: 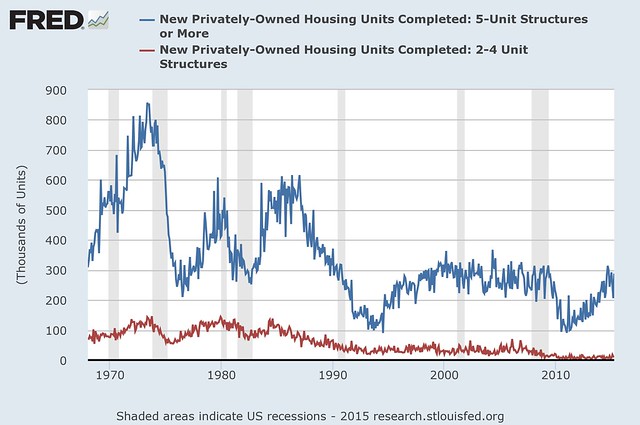 Next up: Wait, you mean today’s apartment boom isn’t actually that big?

3 thoughts on ““Missing Middle Housing”: missing in action for 30 years”