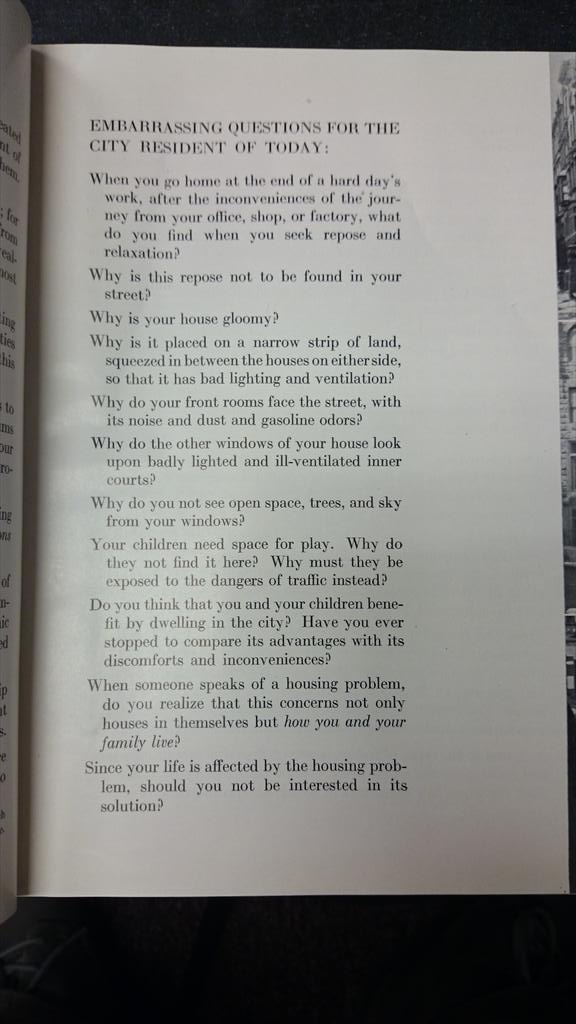 “Can Our Cities Survive,” Jose Luis Sert’s provocative 1942 treatise on the future of Western cities, posed this set of “embarrassing” questions to residents of the era’s cities. Those who claim that rowhouses are uniquely well-suited for families might recall that, not that long ago, they were widely seen as “gloomy” and unfit for family habitation unless extensively modified — and that most of America still thinks so.

Of course, Sert was largely wrong — in particular, the automotive menace should be solved by restricting the cars, not the children — and the Modernists were never quite successful at convincing families that high-rises were worthwhile.

Attitudes had softened just a bit by 1950, when the regional chapter of the AIA issued a report called “Of Plans and People.” Washington was then in a frenzy over the need to house its exploding population. Rowhouses were merely “disreputable,” rather than intrinsically awful:

Home owners have insisted on increasingly severe restrictions against apartment buildings and row-houses–this despite the fact that for many families they are the most suitable forms of housing. Part of this opposition results from the crude design of these buildings. The ugliness of the typical Washington row-house with its two-story back porches has done more than anything else to bring the row-house into disrepute. If builders were more concerned about good design, the public might feel less need for “protection” against apartments and row-houses.