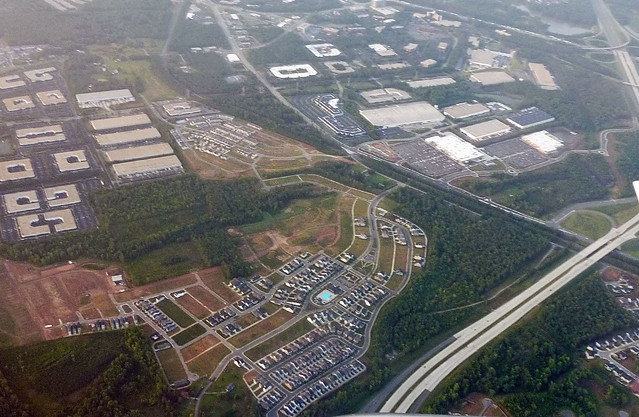 The results are definitively in: when it comes to cutting carbon pollution from new development, location is far and away the most important factor. Even bad infill development will easily beat even the best greenfield design in terms of avoiding car trips — the single most climate-damaging activity in most Americans’ daily lives.

Kaid Benfield illustrates the point by contrasting the VMT per capita within some of the best suburban and urban neighborhood designs of recent years. Grounding his analysis in research, he writes:

[L]ocation is by far the most significant indicator of how much driving typically takes place to and from a given neighborhood. This is because of something called “destination accessibility”: outlying locations have fewer jobs, shopping opportunities, schools and other typical trip destinations within easy reach than do more central locations, causing average driving distances to be longer. (It is also generally easier in more central locations to substitute transit and walking for what would otherwise be driving trips, but such “mode shifts” are statistically less significant to vehicle miles traveled than are driving trip distances.) As a result, carbon emissions from outlying locations, per person and per household, tend to be higher – typically a lot higher – than those from closer-in locations.

It takes a lot of effort to create new “connected, complete communities” from scratch, since a “complete community” depends upon a myriad of services. When the first household arrives in an incomplete “edge town” (like Kitts Creek, shown above), they may be able to walk to other houses and some services. New services won’t arrive until there’s sufficient population to support them — and in many cases, rely upon people living even further out. Contrast that with a new house within an existing “complete community,” which already has all of that community’s services at their doorstep, from day one.

I’ll note that mode shift is less statistically significant because, outside of a few urban cores where destinations are so close by that walking is enjoyable and driving a pain, driving accounts for a substantial majority of Americans’ trips. That makes development within those few urban cores that much more important, in the scheme of shifting Americans away from automobility.

Thus, the most effective land use tool that urban planners have to address the global warming crisis — and at minimal public cost, to boot — is to make infill development easier.

Applied on a global scale (or even at a citywide scale), the potential is vast: 2014’s New Climate Economy report estimated that “compact, transit-oriented cities” could keep 1.8 billion tons (CO2 equivalent) of global warming pollution out of the air annually by 2050. That’s equivalent to decarbonizing the entire US transportation sector, or the economies of Russia or India.