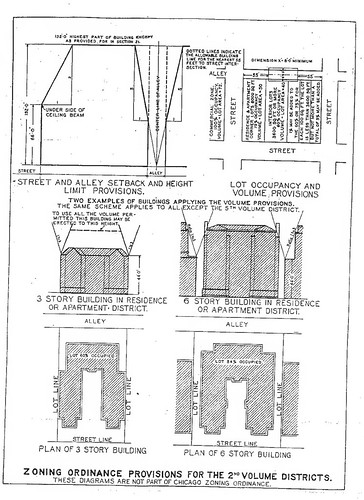 My once-colleague Steven Vance recently noted Chicago’s surprising lack of planning. Indeed, for a couple of years there (as Hunt and DeVries point out in Planning Chicago [great PDF overview]) the city bureaucracy didn’t even have a planning department — just Housing and [economic] Development. That was just as well, of course, since there wasn’t any planning being done then, or since.

Chicago technically did adopt a Comprehensive Plan… in 1966. (Next year, it’ll be eligible for the National Register of Historic Places.) I had long been under the impression that Chicago simply strong-armed pliant courts into not prosecuting this absurd state of affairs, but Steven’s post prompted me to look up Illinois’ municipal code regarding planning and zoning. To my surprise, Illinois has always had a surprisingly lenient Municipal Code — which relieves cities of any obligation to update their comp plans, or to have their zoning be consistent with a comp plan. Under Illinois law, if the Plan Commission says the zoning is so, then so be it; “arbitrary and capricious” claims be damned.

Nonetheless, one brave gadfly, Lincoln Park mortgage broker Al Hanna, once somehow managed to escalate the little matter of zoning’s potential unconstitutionality into state courts some years ago. (This was while I was in college, and working on a project related to the city’s zoning code update — which, of course, drew no legal authority from any stinkin’ comp plan.) Judge Sidney Jones remanded the case with the comment that “[t]he City of Chicago has, and had, no comprehensive plan for development… which renders its zoning decisions to become more subject to scrutiny… [the downzoning] was not passed for public welfare or the public good, but was passed only in deference to the wishes of a few individuals.”

Alas, the city’s lawyers have wiggled their way out from most of Hanna’s suits. For example, Chicago long ago (apparently in 1970, via Public Act 76-583) dropped a special “lawsuit poison pill” into the state’s zoning enabling law [emphasis added]:

(65 ILCS 5/11-13-8) In municipalities of 500,000 or more population,* when any zoning ordinance, rule or regulation is sought to be declared invalid by means of a declaratory judgment proceeding, not more than 30 days before filing suit for a declaratory judgment the person filing such suit shall serve written notice in the form and manner and to all property owners…

I don’t agree with Al about the legal merits of Chicago’s historic landmark law, but on zoning, he does have a point. Outside of downtown, no plan grounds Chicago’s zoning ordinance in the facts.

* This, and similar constructs, is legal code for “City of Chicago” and is found throughout Illinois state law. Illinois’ second-largest city has a population of fewer than 200,000.