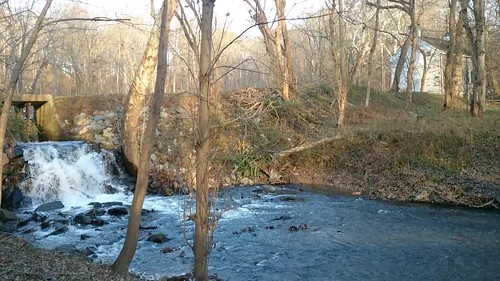 The C&O Canal’s Lockhouse 22 made a great destination for a Thanksgiving-holiday S24O. Not only is it an easy 40-mile roundtrip from Georgetown along the easy towpath, but Pennyfield Lock is situated on a secluded stretch of the river, surrounded by protected lands on both sides of the river — Blockhouse Point Park, the Dierssen waterfowl sanctuary, and NoVa’s Seneca Park. 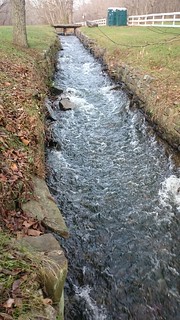 Not mentioned among Lockhouse 22’s amenities was that running water surrounds this lockhouse. Mike High’s book notes that Pennyfield has a “waste weir” that directs canal overflows into the Potomac just upstream of the lock; since this is the first lock below Seneca, where the downstream reach of the canal is watered, there’s usually a good flow across the weir. There’s also a bypass flume just inland from the canal, which also burbled with water headed for a small, stream-fed pool just below the lock.

By contrast, the closer-in Canal Quarters lockhouses (#6 and #10) might have electricity but are surrounded by traffic (Clara Barton Parkway) rather than water. Lockhouse #25 is just a few miles up, but looks out at the Lansdowne golf course rather than parkland. At mile 49, #28 pushes the boundaries of a weekend trip and sits next to busy railroad tracks, and #49 looks grand but is way out west.

Yes, the cabin was chilly — the thick stone walls keep the interior cave-like year-round — and a bit spooky at night, especially when light reflected off the rising moon suddenly appeared. The firewood had been scattered about the woods by vandals, but fallen wood was plentiful. Since it was winter, the water pumps are locked and we had to pack in a couple of bottles of water. At $100 a night, it would make a superb rustic getaway for a small group.