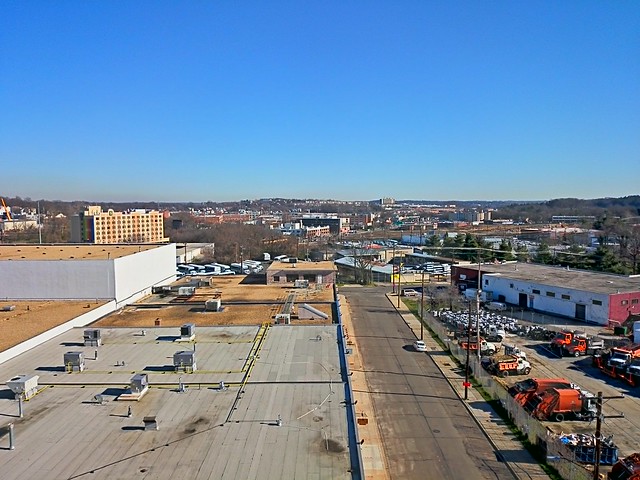 The view northeast from the Hecht Warehouse’s parking garage, towards “NewCityDC.”

Last month, Douglas Development filed plans for NewCityDC, which will bring more than half a million more square feet of retail space to the New York Avenue NE corridor, adjacent to the substantial residential and retail investments it’s gradually opening around the old Hecht Company warehouse in Ivy City.

NY Ave, aka US 50, is the only full-on traffic sewer in DC, with six through lanes, a speed limit up to 50 MPH. For a three-mile stretch between the Maryland line and Florida Avenue (the boundary of the L’Enfant city), it’s paralleled on the north by a trench holding the Northeast Corridor railroad and cut off to the south by a variety of institutions (the arboretum, Gallaudet University, cemeteries), and thus has only a handful of intersections with the street grid. That proximity to the railroad brought both low-density industrial buildings and a Skid Row feeling to the blocks surrounding it. The street hardly has sidewalks, definitely does not have bike lanes, and doesn’t even have a city bus route.

Yet despite all that, Douglas — who has made a fortune turning around the East End of downtown DC — thinks there are customers for 300,000 square feet (a regional mall’s worth, net of the anchor stores) of specialty retail in this isolated location. And they’re sinking lots of money into the area; this is some very heavy-duty and expensive work to do for single-level retail: 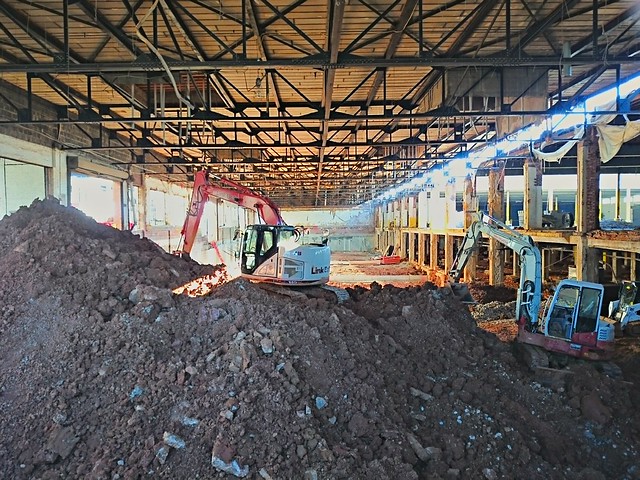 Douglas’ marketing would have retailers think that there are lots of customers right at their doorstep, thanks to dubious maps like this “trade area analysis”: 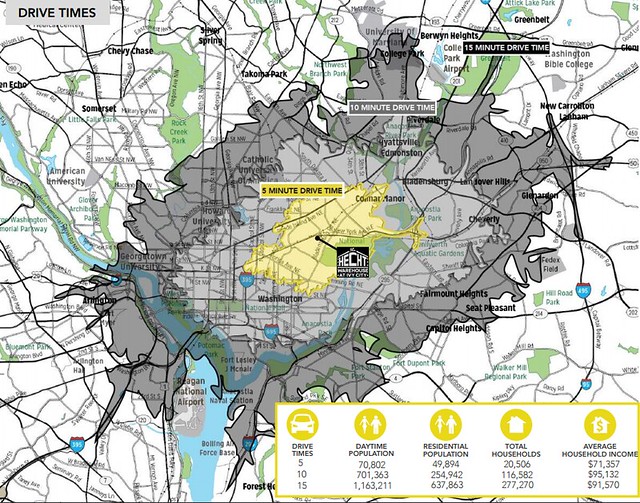 “Average household income” is basically meaningless, especially in prosperous (and expensive) metro DC, since all three of those figures are substantially below the city average of $106,000.

A site-and-vicinity map is even more misleading:

This map highlights thousands of apartments that are being delivered around NoMA. Never mind that many of those new units don’t have parking spaces (since most of the city’s new households don’t have cars), which will make it nearly impossible for their residents to get to Ivy City.

Sure, Hecht is a 4-minute drive from NoMA, and a mere 3/4 mile for any birds who are roosting atop its new high-rises. But for most anyone who actually lives in NoMA, it’s nearly half an hour away (by bus and foot) — during which time that resident could have just gone to Metro Center (with 15 minutes to spare) or Pentagon City or Silver Spring. In short:

Please do not let anyone convince you that Hecht is near NoMa pic.twitter.com/ie3WICb7zG

The real market for Hecht, NewCityDC, and Fort Lincoln’s retail is exactly what you’ll see in the parking lot at the Costco at the latter: lots of Maryland license plates. All of these are set up for easy right-in/right-out access for drivers headed outbound on US-50, who don’t have many other shopping choices until Bowie or Annapolis. That market is certainly underserved — but it’s much smaller than the one that Douglas’ maps promise. Economic development officials in Prince George’s County should take note.