The entrance to Hong Kong’s airport express train is somewhere within this mall. The cross-border bus terminal entrance is somewhere else entirely, and the actual “public” spaces are completely dispiriting.

When I was a small child, John Portman-style complexes were architecture’s futuristic vision: Someday, we’d all live in hermetically sealed downtown compounds of office and hotel skyscrapers set atop multi-story podiums.

My family stayed in several of these hotels on trips; sometimes, my mom would tell me about how she, as a child in Hong Kong, had dreamed of a city of skyscrapers and layers of indoor shops, all suspended above grade so that buses, boats, and cars could fill the ground plane.

That hyper-dense Modernist vision eventually came to pass in much of central Hong Kong, fed by not only its unique geography but also by its unique private-provision model for both rail and property. There’s danger, it turns out, in putting developers in charge of your rail stations; the “gift horse” of free infrastructure comes with strings attached.

When private firms are put in charge of designing pedestrian circulation networks, they will place their values — primarily shuffling eyeballs past storefronts — over the public’s need for legible, direct links from A to B. The tremendously high value of rail access behooves developers to elbow their way closer to the station; the location imperative isn’t to be near transit, it is to be at transit; to make it not just easy, but necessary to traverse their property. And, once the development has cornered the transit station, it will seek to entrap the resulting pedestrian flows within a spiderweb of passages. As Chris DeWolf writes:

Last month, a survey of 657 Tsim Sha Tsui pedestrians conducted by urban design watchdog Designing Hong Kong revealed that 77 percent prefer using street-level crossings over footbridges and subways… “The problem is that bridges and tunnels force you into particular routes that limit your ability to take the shortest path,” says Designing Hong Kong convenor Paul Zimmerman. “People also pick attractive routes. That’s a very qualitative statement, but part of what makes a route attractive is being able to see other people, to window shop, to have an experience. With subways and footbridges that becomes quite limited.”

An early version of this phenomenon can be seen in Montreal’s underground city, the most valuable retail frontage is as close to the train platforms as possible. Thus (almost as in casinos) the developers twist and turn the corridors to herd people past the shops. Future iterations of the phenomenon will soon be unveiled at the World Trade Center mall and at Hudson Yards.

Edit 7 Jul 18: author Marion Girodo has a book of “urban mangroves,” the multilevel urbanism that crops up around metro stations in Montreal, Paris, and Singapore.

Edit 17 Jan 17: Henry Grabar in Gothamist writes of “the oculus”: “If Grand Central is a train station with some shops, the Oculus is a shopping center with some trains.” 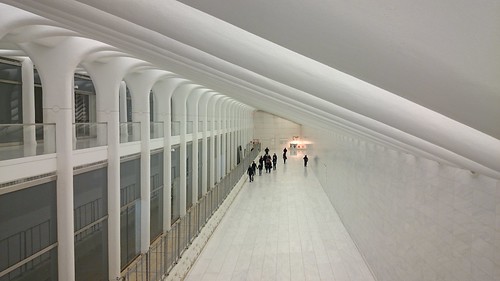 Want to get to the PATH, or cross West Street to get to the Hudson? You’ll have to walk down this hall, and oh by the way there are plenty of shopping opportunities.

A similar landscape may be emerging at Tysons Corner, where the in-process retrofitted suburbia — now and forevermore ridden with alienating highways — shows little sign of ever becoming a Greenwich Village sort of urbanism with small blocks of public streets lined with small-but-tall buildings. Instead, the spatial complexity that’s emerging is of a very different, much more Portman-esque sort. Philip Kennicott writes in the Post:

The decision to elevate the stations — a far less expensive approach than burying them — may well presage this sleek new world of elevated plazas and public areas, disconnected from the ground. A new office building across from the Tysons Corner station is built atop a parking garage, so that at ground level one faces a seemingly impenetrable plinth. Already, a web of pedestrian bridges — some built by Metro, others by private developers — is emerging, keeping us safely above the world of machines and hydrocarbons and asphalt…

One wonders if you will emerge from these stations with [a] sense of pleasant surprise and rootedness in the urban landscape… Likely not. Rather, you will emerge, slightly disoriented by the ever sameness of the commercial and physical space around you, wondering for a moment if you have arrived at the right station, before your basic sense of purpose — to get home, to find a restaurant, to locate a shop — kicks in, and you begin to move by habit and instinct through a pleasantly unobtrusive world of concrete and glass that could be anywhere. 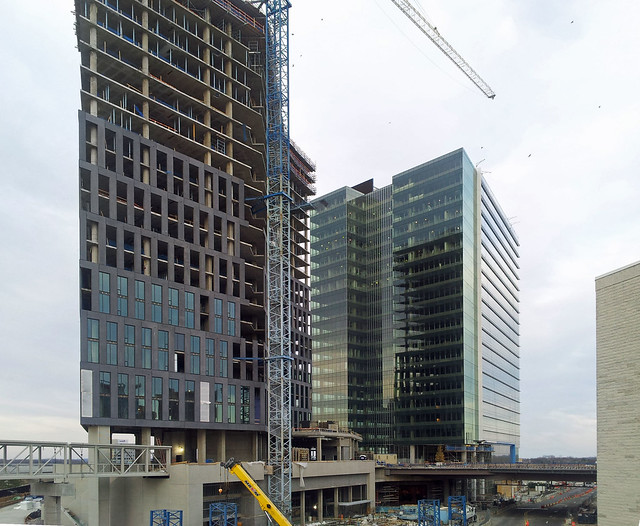 At Tysons Corner Center, the megamall at the heart of Tysons, building a bridge keeps the distance from station to mall is 300 feet — a 1.6 minute walk. The bridge siphons customers directly into the mall, creating tremendous value in three dimensions: “You’ve got a first floor on the first floor and a first floor on the second floor, so you’ve solved the verticality problem” [of pulling mall foot traffic from the entry to different levels], Timothy Steffan, an executive for mall owner Macerich, told the Post’s Jonathan O’Connell.

This Disney-esque strategy of spiriting people directly into an immersive environment has ample precedent: in fact, Roppongi Hills, a fantastically successful redevelopment in the heart of Tokyo, also uses an elevated plaza to deliver customers from the subway onto the development’s podium. The experience for customers who drive in is akin to what Rick Caruso’s malls or skyway’d downtowns provide: parking garages deadening the street environment all around, but a fantastic public space within. Sure, bus and bike customers have to deal with an ugly exterior, but the privileged modes (driving and heavy rail) get the red carpet. 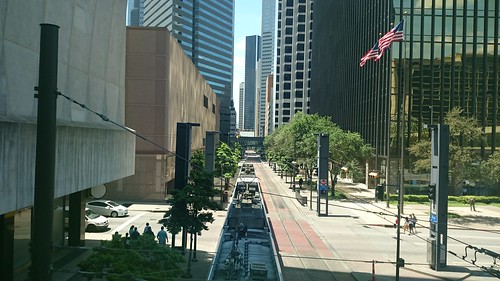 My first instinct is to warn “creative” policymakers to be careful what you wish for: these projects result in such high cost and complexity that the only financially worthwhile result is a giant mall. They’re so huge, boring, and bland because of private value capture. Finding room in a private developer’s pro forma to build expensive underground rail infrastructure requires selling stupendous quantities of expensive corporate real estate, which will never be cool and lively. It also requires generous, greenfield-esque parcel sizes. In the worst case scenario, the project fails, and there’s nothing worse than a white elephant in the middle of the room.

Yet as dispiriting as these initial examples are, there’s a glimmer of hope that they’ll eventually be okay. With enough time, enough density, and enough owners, even these bland malls could evolve into something interesting. Hong Kong’s experience shows how the weird linkages that result from generations of ad-hoc decisions and relentless foot-traffic flows have created a hyper-dense end result that can be beautifully complex in a postmodern, emergent-urbanism way. This isn’t immediately apparent from the workaday commercial architecture, but can be mesmerizing when expressed in diagram form — as the recent book Cities Without Ground shows (high-res image slideshow). A two-dimensional plan, or even a figure-ground diagram, is useless when expressing vertical spaces.

A cityscape of streets, internalized routes and multi-level links, even without clear articulation, is open to casual exploration, and there is little need for city form to be overly organized or pronounced in order to be legible… This underlines an essential difference between the formal framework of Western public spaces and the more diffused and informal realm of social space associated with the Hong Kong street, where the relationship between public and private spaces is less tangible, and the routes between them work just as effectively in three dimensions as in two.

Perhaps China’s homogeneity and sheer density (bear in mind this is about 1-2 orders of magnitude higher than urban America’s) might increase social trust and thus break down the hierarchy of spaces — people there feel more comfortable wandering down dark alleys. Yet perhaps we could shortcut to that future: emerging spatial technologies, like smartphone-based mapping, are quickly obviating highly legible spatial hierarchies. Customers can now just as easily find a shop hidden in the back corner of a buildings as one that shouts its presence with highway-sized signs.

Or maybe not. Toronto’s PATH system is now 40-odd years old, serves more than 100,000 pedestrians a day (so many that its closure would send downtown into gridlock), and has apparently outcompeted street-level retail spaces. It’s also a navigational nightmare of corporate sameness, according to Spacing’s Kieran Delamont:

The PATH is a mall, first and foremost. Beyond access to over half a dozen food courts, at least two massage parlours, and more sushi restaurants than I cared to count, I put it to you that, with its existing wayfinding system still in place, the PATH offers nothing especially preferable over supra-terranean navigation… It is a seemingly endless maze of mall corridors, hallways, and atriums. Unless you are a person for whom the distinctions between Jamba Juice and Jugo Juice are particularly meaningful, everything in this place feels exactly the same; with each new tunnel you encounter in here, the space expands physically while being visually constricted. Because this space lacks the distinctive landmarks that you often find above ground, there is very little to distinguish it from every other mall you’ve been in. The more of it you explore, the less it feels like you could ever remember any of it…

The balance between mall and transit network is slanted heavily towards the PATH’s commercial interests; the dominant incentive of the landowners is to keep you in their slice of the PATH, not to move you through efficiently.

What we need are architects and developers who understand that, and aren’t afraid to create more interesting, if less-legible and less predictable, places — perhaps even fractal-like, medieval-esque street plans in three dimensions. 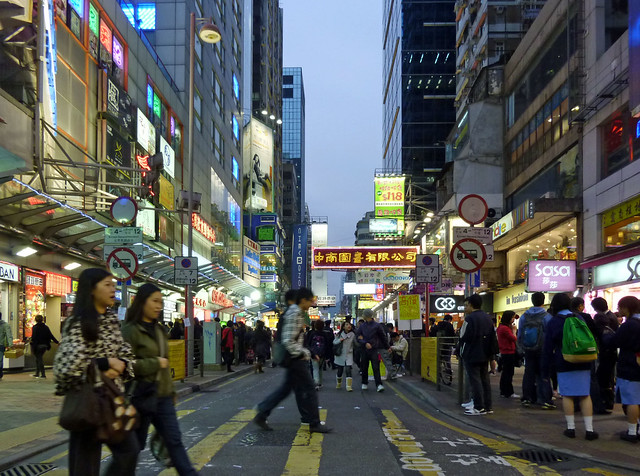 America’s lower urban densities mean that our over-commercialized transit districts may never quite achieve this level of spatial complexity, but by golly, why not try?

2 thoughts on “Help, a mall ate my walk shed”