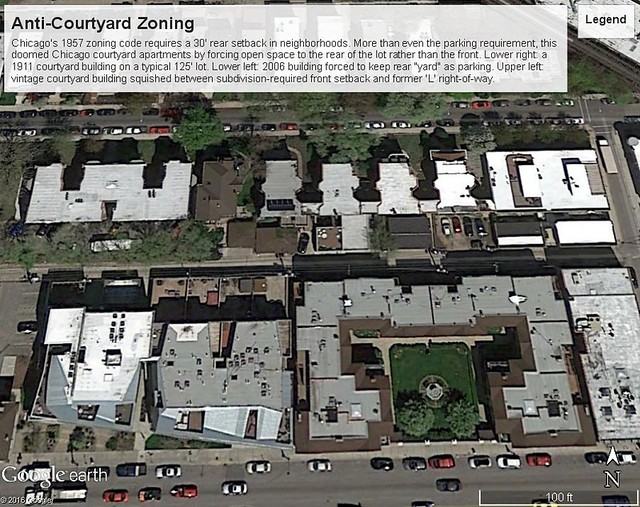 Here’s my old block in Wicker Park (and namesake for this blog): the 2100 block of West North Avenue. It’s also an interesting illustration of how Chicago’s 1957 zoning ordinance made courtyard apartment buildings illegal — even though this eminently livable, passively vented building type defines high-density Chicago neighborhoods like Rogers Park and South Shore.

What did courtyards in were backyards. The 1957 ordinance (mildly updated since) requires a 30-50′ rear yard for residential units in all but the densest of downtown zones; functionally, this is where the garage went. This mandate shifted open space to the rear of the lot, and the entire point of a courtyard building is that the open space is consolidated at the center of the lot.

The 1911 C-shaped courtyard shown at lower right has minimal setbacks along the sides and rear, which results in a generous central courtyard. The 1901 3-shaped courtyard at upper left was required (by a subdivision-specific covenant and by a ‘L’ line easement) to retain front and rear setbacks, and as a result its courtyard shape is so constrained as to be almost illegible. The new buildings at lower left were required to have a rear setback (the ones at far left got a slight variance) and thus consolidate their open space at the front and rear of their lots, to the great detriment of the tiny sliver of open space that the architect sought to insert in the middle.

Other contributing factors to the demise of courtyard apartments include: