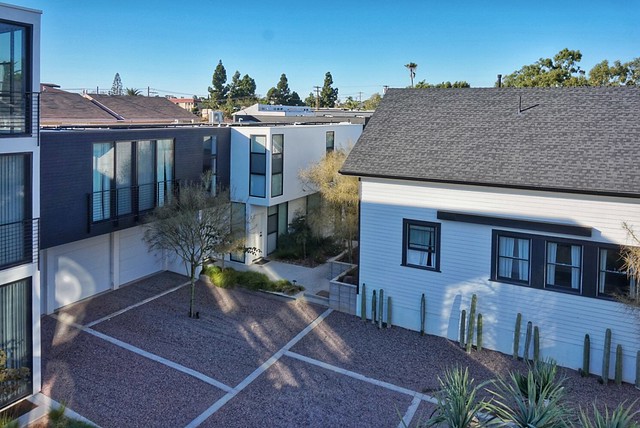 The ULI Case Study that I wrote about Sofia Lofts, a 17-apartment development in a neighborhood in eastern San Diego, was recently posted. I was particularly intrigued by how the developer/architects used shared space to maximize usable open space while meeting the letter of the law with regard to parking requirements:

For the balance of the 21 [parking] spaces planned, six more garages are accessed via the courtyard. The plans show seven more spaces within the courtyard itself, immediately in front of the garages — but to keep the space inviting, the spaces in the courtyard are off limits for tenant parking. It’s a small net loss for NDD, which discounts the rent for some tenants who forgo on-site parking, but results in a common area that looks like an expansive garden, rather than a parking lot.

The materials used within the courtyard were also chosen to make the garden feel like a place where cars just happen to be allowed. Part of the driveway near the alley is paved with concrete, but the center of the property is covered in pea-sized gravel. The texture of the gravel slows down cars to walking speed, adds visual and auditory interest, and permits rainwater to filter through. Its inspiration comes from a house in Italy that the Nakhshab family lived in; as Soheil recalls, “The courtyard we would always play in had that type of gravel, and we are seeing the tenants’ children doing the same thing.”