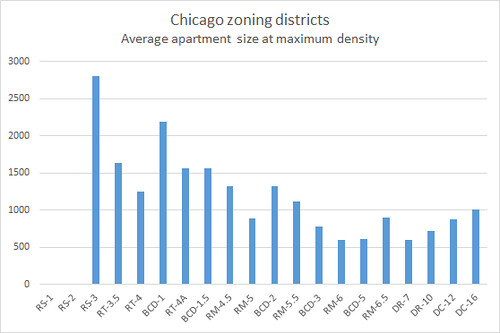 Chicago’s zoning code has a built-in bias against smaller apartments – except in a few high-density zoning districts, which cover a vanishingly tiny slice of the city.

The zoning ordinance regulates building size and density in three ways: through floor area ratio (FAR), “minimum lot area per unit” (MLA, a backwards way of saying dwelling units per acre), and through various setback regulations. Yet these don’t follow a linear relationship at all; instead, the interaction between FAR maximums and MLA minimums encourages larger buildings with fewer apartments in lower-density districts, and more apartments per building in higher-density districts.

What this graph shows is: If I have a standard city lot in a given zoning district, and I build the biggest possible building with the most possible units, how large would those units be? The answer varies tremendously across the city, from a low of ~600 square feet in high-density districts like RM-6 and DR-7, to “impossible” in the lowest-density districts (note 1).

Only for RM-5 and above, high-density zoning classifications pretty much only found in a narrow band along the lakefront, do the average apartment sizes permitted begin to dip into one-bedroom territory.

Someone who wishes to build new smaller apartments, like one-bedrooms or studios, in order to accommodate shrinking households can only do so in neighborhoods like Lakeview or Logan Square by either (a) under-building the FAR, at a considerable opportunity cost, or (b) getting rezoned to a denser category. Anyone who goes the latter route might as well build a lot bigger and higher, too.