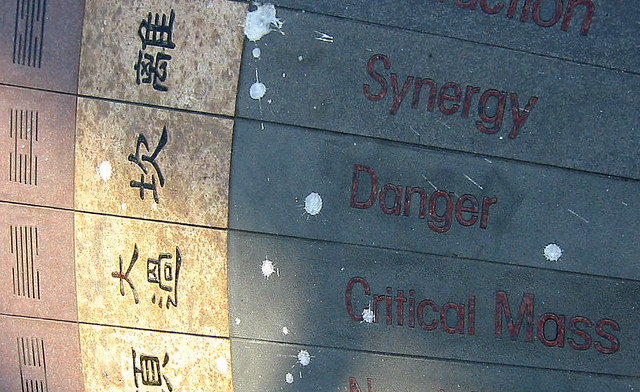 A few short topics for January, all around the theme of achieving critical mass in three very different markets for metropolitan services.

Google — which like many expanding tech companies is focused on reducing its car and shuttle trips as traffic worsens during the current boom — may be eyeing transit options beyond freeways. Pacific Shores is a half mile from the Port of Redwood City, where a Google pilot project earlier this year tested running ferries from San Francisco and Alameda to the port. The Water Emergency Transportation Authority, which administers the San Francisco Bay Ferry routes, has studied regular public ferry service to Redwood City, with a potential public terminal practically next door to Pacific Shores.
“I know they really liked the ferry and the concept. Their challenge was getting people off a boat and putting them on a bus to Mountain View, and that was taking 25 minutes,” said Kevin Connolly, director of planning and development for WETA. “This might be one way to address it.” […]
A Redwood City terminal would cost about $15 million. But the county doesn’t have ongoing operational funding, Connolly said.
A major built-in user such as Google could help make service pencil out, he said.

I’ve written critically about the peculiar geometries (and thus poor economics) of water taxi transit before. Having high-density development built on landfill immediately adjacent to a deep-water port certainly solves some of those problems — but a ferry does need at least two ports. However, most other Bay Area jurisdictions have incredibly restrictive development policies along their waterfronts, and many of the Bay Area’s most desirable residential areas are well inland (and atop hills, in fact).

Perhaps last-mile bus service would supplement a 101-bypassing ferry on one or both ends. That adds in the time and hassle of a transfer; when combined with a lower peak speed (around 40 MPH) and increased susceptibility to inclement weather, it’s tough to see how it would be a faster, more reliable, or more fuel-efficient option. (2008 figures submitted to FTA, as reported by Wayne Cottrell in Energies, indicate that ferry operators in the USA have a median fuel economy of about 10 seat-miles per gallon of fuel.)

2. General Growth Properties plans a $2 billion investment in street retail, ultimately aiming to have 15% of its portfolio invested on high streets in the principal gateway cities of NYC, Chicago, Miami, Boston, DC, SF, and LA. Even in these high-rent areas, GGP sees “assets with significant unrealized growth potential,” with below-market rents and under-used vertical space. 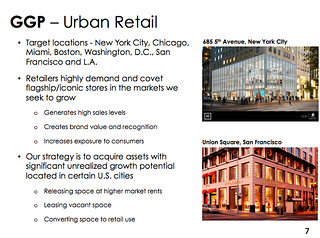 Many office REITs have focused on CBD office, but these properties have historically been neglected by large retail REITs. Adjacencies matter much more with retail than with office, which creates a “commons” problem that undermines streets with fragmented ownership.

GGP has hinted at two approaches to circumvent this. Like Acadia Realty Trust (an exceptional retail REIT that has redefined itself as a high-street owner), it might hope to aggregate enough properties to create its own mall-like ecosystem, and thus internalize the external benefits of its investment. GGP’s first big investment, an equity stake in the Miami Design District, certainly has that advantage. However, the DD is a singular example unlikely to be replicated elsewhere, so it appears that GGP will instead have to rely upon its high-rent neighbors to similarly aggressively upgrade their properties.

This could be a long waiting game, though, since a lot of urban property isn’t owned by others who need the same quick upside that a REIT does. Micah Maidenberg quotes a skeptic in Crain’s:

“The street-retail business, just like luxury hotels and other sorts of high-end projects, tend not to be a quarter-to-quarter-growth kind of business. It’s more of a long-term hold,” says Jeffrey Donnelly, a managing director at Wells Fargo Securities in Boston.

3. Two few weeks ago, I was visiting my parents in North Carolina and feeling under the weather. While looking up my out-of-area health care options, I came across an instructive article in Milbank Quarterly (by Daniel Gitterman, Bryan Weiner, Marisa Elena Domino, Aaron McKethan, and Alain Enthoven) about why Kaiser Permanente’s integrated group medical practice failed in the Triangle — where I’d previously been a satisfied customer.

My main takeaway from the case study was that, while “prepaid group practices” like Kaiser or GHC in Seattle (not to mention vertically integrated government systems like the VA) do offer tremendous cost efficiencies, they also rely on economies of scale that are difficult to set up from scratch.

The article estimates that KP’s break-even point is around 100,000 members in a metro area. That figure would have been a huge ask, given that the Triangle’s population was well below a million at that time, and spread out across a broad area. KP needs that kind of scale to build bargaining power, both:
– on the cost side, when bringing services in-house (the essential feature of their cost-containment model) or bargaining with hospitals and specialists; and
– on the revenue side, when selling their product to employers and employees who have to be sold on a choice that (a) most would find less convenient and (b) involves disrupting the “stay with my doctor” inertia many customers have.

It’s not a coincidence that prepaid group practices are best established in markets where either government employees or unionized employees bulk-purchase healthcare services. But HMOs are beginning to re-emerge now that the Triangle is bigger and denser, the ACA exchange has made the health insurance market less fragmented, and more doctors have organized into group practices linked to specialists via electronic health records. One new option in this year’s ACA marketplace for North Carolina (and especially valued, since last year only NC Blue Cross participated in the marketplace) is Coventry’s CareLink HMO, which uses Duke Medicine’s primary care network as the in-house practice. 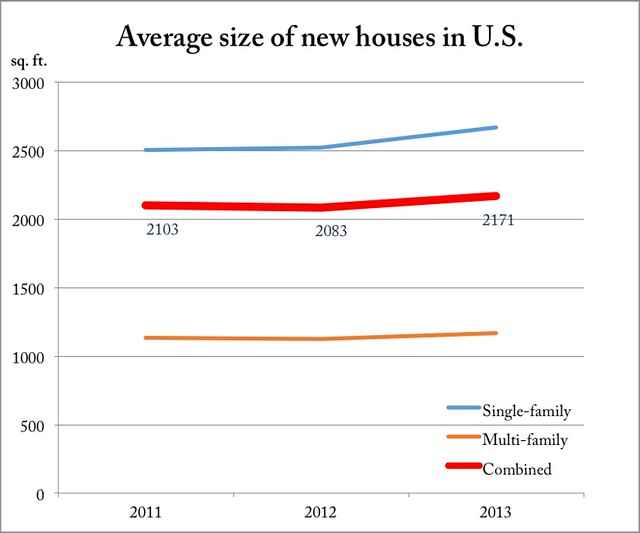 But scratch a little bit at the surface and you’ll find that it’s an artifact of the Great Recession, not an existential conundrum. Consider that the Census’ Survey of Construction, the source of said statistic, only measures a universe consisting of new single family (usually for-sale) houses. However, these share of total new housing construction that is in single-family houses continues to fall. Just from 2011 to 2013, multi-family houses went from 29% to 33% of all new housing completions. Meanwhile, their size hasn’t budged: it’s consistently been around 1,100 square feet (+/- 50) since 1999.

The chart above also comes from Census data, and tells a more complete story. The average size of new houses built in the USA, both single- and multi-family, declined from 2011 to 2012, then ticked up to a record in 2013. It hasn’t been on an upward march forever. Another reason why this data point isn’t quite as important as it might seem at first glance: many fewer Americans are in new houses, period. 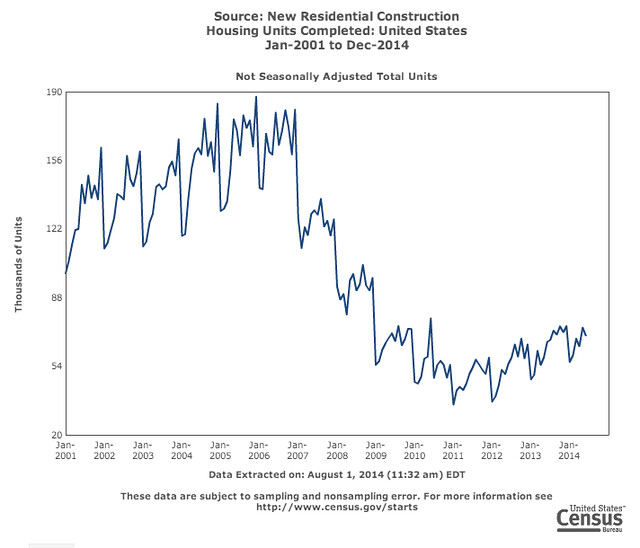 Construction may be up slightly, but it’s still well below its peak. Completions fell 70% from the 2004-2006 rate, and now we’re back up to 60% below that (completely unsustainable) rate. From builders I’ve heard at ULI panels and the like, new move-up product is still selling in the suburbs, but first-time buyers are staying in rentals longer, largely due to tighter financing. Hence, fewer small homes are getting built, as younger households stay in existing stock for much longer, and the average home size is increasing. (Oh, and remember: we’re talking about fewer smaller single-family houses. The number of multi-family houses, small and medium-sized, is increasing.)

Thus, the real story is that the for-sale single-family starter home, as a product type, is dying off. For example, when my brother recently purchased his first new house (at 35, considerably older than the 28-year-old median buyer at, say, Park Forest), he didn’t get a starter home. He went directly from an existing multi-family unit to a move-up sized house.

* Making the additional methodological error of taking the definition of “central cities” seriously.