Daniel Kay Hertz assembled a few current examples of how overbuilding in the rental apartment market is keeping rents down. 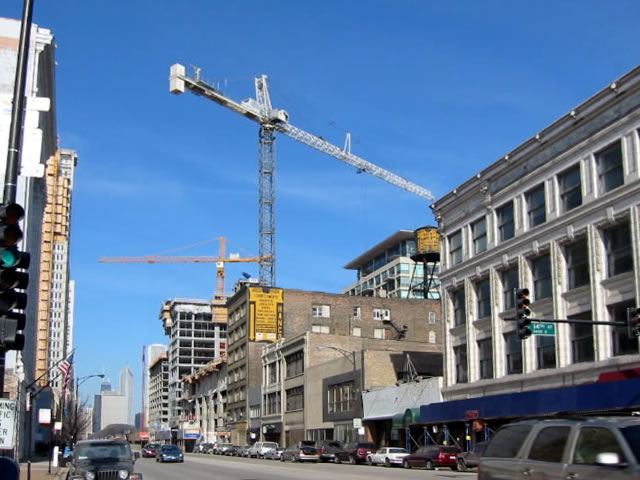 Market-rate and affordable apartments under construction side by side in the South Loop.

A commenter pointed out that the South Loop multifamily market cratered in 2009 — and more broadly, the downtown Chicago market was flat over the entire 2000-2010 real estate cycle. People who bought some of the first Loop loft conversions have not earned more than the rate of inflation. In 1999, the buildings at 208-212 W. Washington St. were purchased for loft conversion, which was truly unusual then. (I worked just a few blocks east, and was in the market for a condo when it was closing out.) Today, 212 W. Washington St. #2108 is on the market for $395,000, less than the $414,411 that its $319,000 sale price in 2002 inflates to. Other properties in the building have recently sold for less than their 2001 nominal prices. This is despite a “hot” market that’s “running out of condos.”

(I brought up this example during the Height Act battle, when some obtuse conservatives claimed that skyscrapers caused, rather than merely correlated with, high housing prices in Manhattan. Well, Chicago builds more skyscrapers, which allows its downtown housing supply to match growing demand.)

In a Brookings post-mortem [PDF] on the 2008 crisis, Karl Case (yes, of Case-Shiller) notes that broad housing price declines are rare: “nominal prices never fell over any full quarter between 1975 and 2005,” and that fact gave bankers’ computer models undue confidence in ever-rising prices. Moderate oversupply rarely results in falling prices because housing markets have other ways of discounting — sellers trade time for money and just wait it out:

Another important aspect of housing market efficiency is that prices tend to be sticky downward. In most markets, when excess supply develops, prices fall quickly to clear the market. But housing downturns have been characterized by sticky prices. Sales and starts drop but prices are slow to respond…
Downwardly sticky prices lead to “quantity clearing markets” rather than “price clearing markets.” […] Demand drops. The inventory of unsold homes rises. Prices stick. Output falls. The inventory of unsold property remains high (because a house is a durable good, not a consumable). But household formation rates remain positive, and the new households eventually absorb the excess inventory and output rebounds. Assuming there is upward inertia, prices then rise and ultimately overshoot; demand again slows, starting the next cycle.

For rented real estate, contract rents are only one way to set prices. Other ways of discounting abound: free months of rent, tenant improvement allowances, improvements to fixtures or common areas, bundled services (like utilities), additional amenities, and outright gimmicks can effectively act as “discounts” even while nominal rents don’t decline.

Case also mentions that housing is a heterogenous good, where each property is different. In real estate markets, that usually plays out as a “flight to quality” where prices hold up for the best buildings, and prices fall for lesser locations and uglier buildings. This phenomenon has dampened urban dwellers’ memories of the 2008 crisis — they’re less likely to remember the price decline, since “home values have generally held up better the closer a home is to the city center.”

At a local or regional level, though, housing prices do decrease on a pretty frequent basis, and over-supply is usually why. In “Why Do House Prices Fall?,” a pre-crisis paper written by Daniel McCue and Eric S. Belsky for the Harvard Joint Center on Housing Studies, the authors found that severe overbuilding almost always leads to housing price declines. 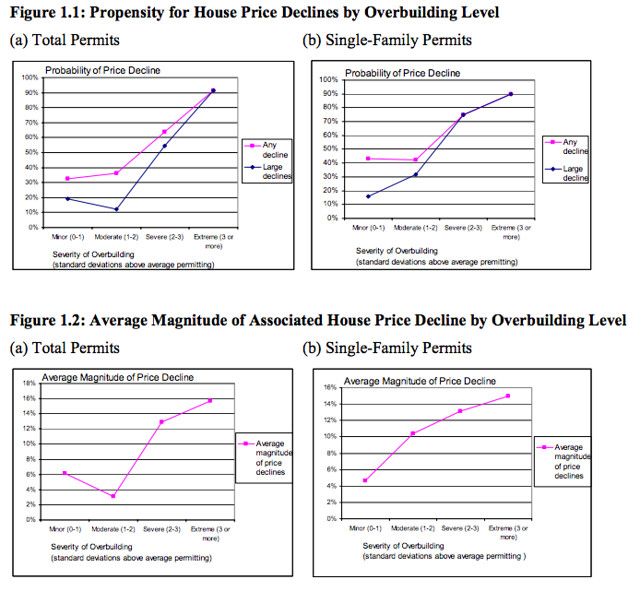 The graphs do appear to vindicate the notion that market forces alone can, without subsidies, cause housing prices to decline. The housing-permit equivalent of a 300-year flood will almost guarantee that prices will drop by around 15%.

McCue and Belsky note that such overbuilding has basically disappeared from major cities in recent years, though. Instead, these cities have extirpated the rare beast and now systematically underproduce housing. Since nobody can remember prior oversupply crises, they now feel free to deny that such a thing is even possible.

Note that of the three major factors McCue and Belsky tie to house price declines, overbuilding is implicated more often than either employment loss or overheated prices. Just high housing prices on their own rarely led to corrections; because housing prices are sticky, high prices just plateau for a while. 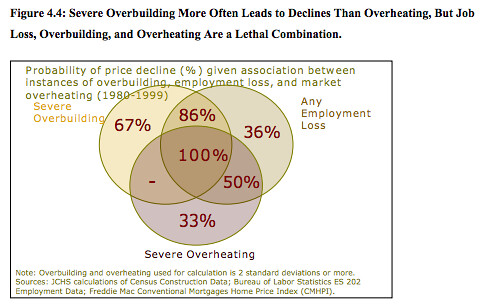 Even in the realm of luxury goods (which some wrongfully claim that housing is), a good old supply shock is always eventually able to bring prices back into line. Here’s the supply and price of Maine lobsters, whose prices collapsed as the recession cut demand for ostentatious restaurant meals, but where growing supply has kept prices down even as demand rebounded: “Lobster, long considered a luxury, is becoming a little more ordinary.” 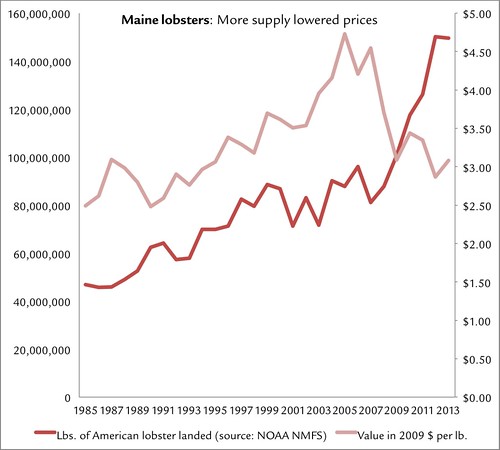 Sadly, San Francisco has underbuilt to the point where it would take a a 26% increase to its current housing stock to get the market back into balance.