In a recent speech to District Department of Environment employees, Mayor Muriel Bowser offered some warm words about Sustainable DC — but fell short of a full-throated endorsement:

We have to be very careful in government about how we distribute our resources, and how we take care of the community. We inherited it, and we have to leave it better for the generations that follow us…

Just to put one of those performance goals into a global perspective, Sustainable DC has twin goals of increasing the District’s population by 40% and shifting 75% of commute trips out of cars — baseline goals that MoveDC started with, and crafted an implementation strategy around. Alex Block points out that this is certainly doable, but it isn’t easy. 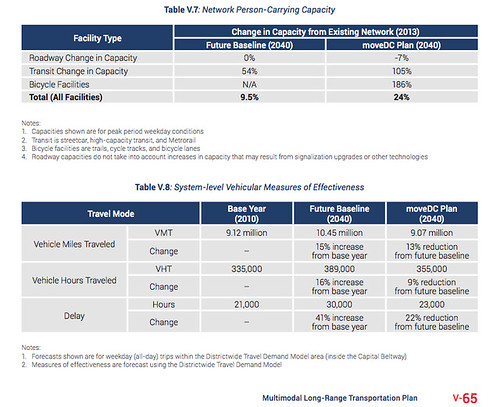 To do so will require more than doubling transit capacity, almost tripling bike capacity, and cutting car capacity by 7%. It would avert over one milion VMT every weekday — which (with current emissions factors, which assume today’s technology) would cut 580 tons a day from DC’s carbon emissions, more than 3X as much as the reviled Capitol Power Plant puts out.

Smart growth policies like MoveDC are a fine example of acting locally while thinking globally, as these are local policies that would have global consequences. The National Research Council & TRB estimate that a national shift towards denser development — including shifting more population growth into the District from the suburbs — would cut CO2 emissions from driving by 11% by 2050, even before any change in vehicle technology. That’s 132 million metric tons of CO2 each year, an amount exceeding all coal emissions from DC, Maryland, Virginia, and West Virginia. Or, put another way, smart growth cuts driving, which could cut as much CO2 as shutting down all of our region’s coal power plants.

Of course, we will absolutely need to do both — and much more — if we’re to have any hope of avoiding a certain existential threat to DC’s future. But only smart growth and energy efficiency cut emissions over the long run, and pay for themselves in the short run.