Conference calls announcing corporate quarterly earnings don’t usually turn up explanations about why the Rent Is Too Damn High, but then again most companies don’t own 100,000 apartments across America, clustered in the biggest and most expensive cities. These are the folks who are raising your rent, and the reasons why don’t have anything with the usual bogeymen.

So, forthwith, some annotated comments by David Santee, chief operating officer of Equity Residential, from their 2014 results call. 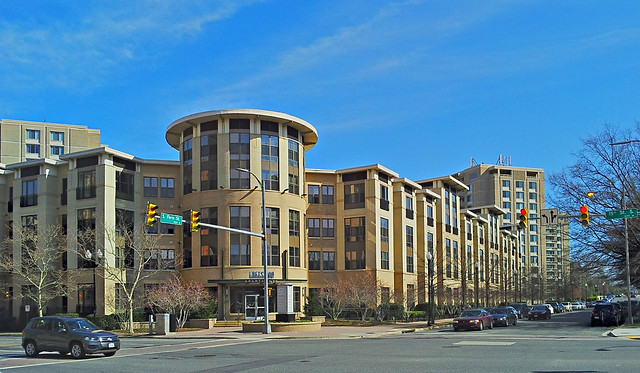 Equity Residential owns this building, and most of the thousands of apartments in Arlington’s Crystal City neighborhood.

1. California’s multi-year drought wasn’t solved with a few days of rain this winter — and, as the state legislature’s own analysis says, the generation-long drought of housing starts won’t be solved with a few new towers here and there:

“San Francisco continues with epic pace with significant acceleration in Q4 [2014]. In one of the most under-housed cities in the country, deliveries are minuscule and simply don’t seem to be relevant.”

Indeed, San Francisco is in such negative territory with housing (and water, for that matter) that more than doubling San Francisco’s population (which would still leave it half as dense as Manhattan) might only have kept housing price inflation in line with the national average. Note that’s not “falling housing prices,” since that’s rare, just “not increase quite as fast.”

2. New York City’s too-damn-high prices can’t be blamed solely on a handful of zillionaires snapping up shoeboxes in the sky. Instead, the blame lies squarely on everyday New Yorkers, or rather on the buoyant economy they’ve created and surprisingly limited new construction they’ve permitted.

New York City specifically Manhattan remains stable, with only slight concentrations of new deliveries on the upper west side… However, with population in the metro achieving the new high of 8.4 million people, a pick up in business and professional service jobs, and the continued growth in jobs away from financial services, New York should produce four-handle revenue growth supported by an expected 155,000 new jobs in 2015.”

3. The era of “boomtown DC,” the city of Fox News nightmares where Barack Obama used government debt to hand out Obamacare-regulation-writing jobs like candy, appears to be ending. Or maybe it never existed: much of the District’s population growth turns out to be just the usual machinations of a large metropolitan area rearranging itself — in this case, as with many others, centripetally.

Not that this particular phenomenon is unique to DC, of course; Equity boss Sam Zell has noted a broad-based “increasing demand for housing in the urban markets.

The centripetal pattern also applies to the usual flow out from cities, which has been stanched in recent years:

The recession diminished this flow. Fewer than 23,000 young adults left New York annually between 2010 and 2013. Only about 12,000 left Los Angeles—a drop of nearly 80% from before the recession. Chicago’s departures dropped about 60%.
Young adults who moved to the three cities for school, internships or early jobs—or simply because it seemed cool—may now be stuck, said William Frey, a demographer at the Brookings Institution… In tough times, finding well-paying jobs may be easier in big cities, offsetting their relatively high costs of living.

This would be a terrific smart-growth opportunity to capture more population in resource-efficient, highly-productive, low-footprint urban areas — if only said cities were more affordable!

While I’m quoting at length, and because it’s marginally relevant, Old Urbanist wrote up this useful comparison to how America’s zoning system systematically creates bountiful affordable housing… for cars: