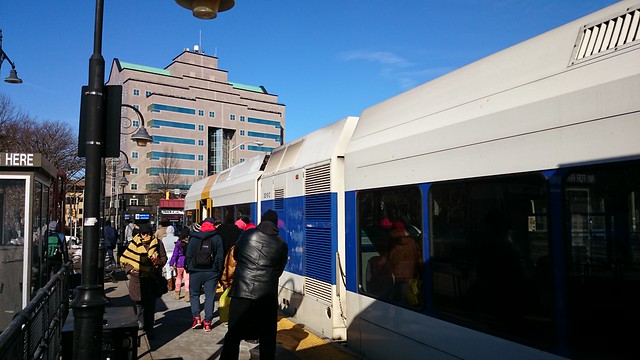 Look, an LRV with no catenary! The diesel powerplant in the middle (note the stained exhaust vents) produces its characteristic vibration and noise, and unlike a commuter train, the passenger compartments are all subjected to it. It’s also definitely slower; by one calculation, an electric LRV could do the same route 18% faster. It seemed out of place in the urban centers on either end, but more appropriate in the suburban villages in between.

These might be appropriate for other “interurban” lines with wide stop spacing and relatively low station-area densities. Given that most suburban areas are already arrayed along roads rather than rails, and that the train isn’t much faster than a bus, perhaps this isn’t the panacea for suburban transit.

One thought on “Friday photo: DMU in Trenton”