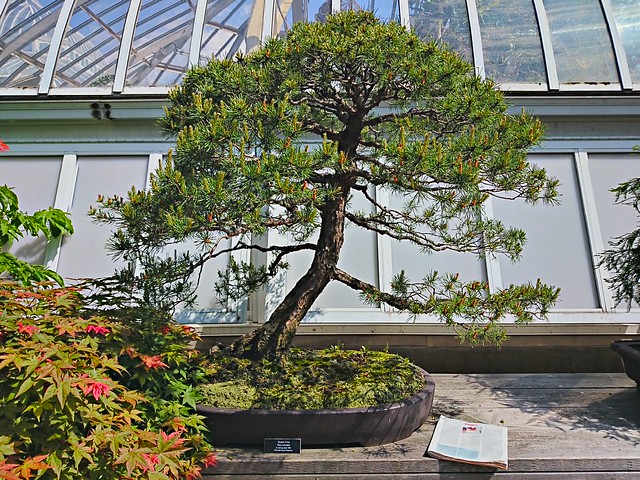 The exception that proves the rule are bonsai, “the most unnatural nature that exists,” and “like a verb…. not a noun — it’s doing.” Trees can survive when confined to tiny boxes that constrain their growth. This 55-year-old Scotch Pine at the Phipps Conservatory would, on a managed plantation, have a trunk one foot wide — wider than the magazine at right, about half the diameter of the planter this tree lives in — and be 60-80′ tall.

However, bonsai require a lot of care and feeding just to survive, including extensive pruning to thwart natural growth instincts. Without that pruning, the tree gradually consumes all of the soil’s nutrients and starves. All this intervention turns what should be a robust, independent tree into a fragile hothouse flower, subsisting on life support. At this juncture, even if it was freed from its constraints, this tree could never match the size of its wild counterpart. It’s a neat inversion of the usual relationship between man and nature, but like seeing a bored tiger at a zoo, it’s also a bit sad to see.

Natural systems also impose limits on their own sustainable growth, of course. Cycles see growth culminating in decline and death, then renewal and evolution. But nothing that’s alive stands perfectly still.

Those who propose to stop growth should have the humility to acknowledge that doing so will change the very nature of growing things. By giving themselves free rein to change the city, they are placing a tremendous burden on the resources of future generations.