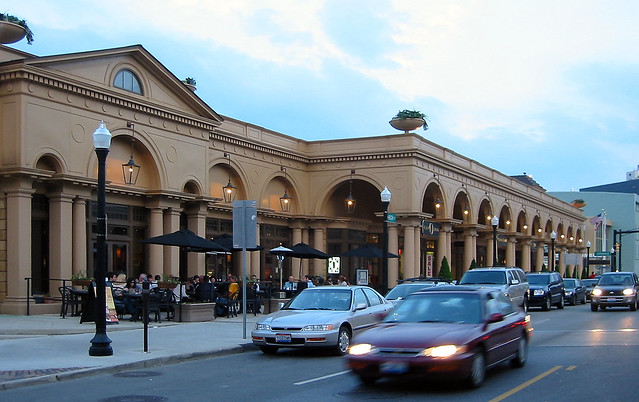 I-670 hides below this building in Columbus, Ohio.

Whether I’m biking down F Street and running headlong into it, or dodging its construction equipment on the infrequent occasions when I have to drive through the I-395 tunnel, it’s hard to miss Capitol Crossing — now the largest development underway within downtown Washington, DC. I knew that this was an unusual project, but it turns out that it’s incredibly unusual: the only instance of a privately financed freeway deck anywhere in the country.

The “Ponte Vecchio” example that everyone points to is The Cap at Union Station: two narrow retail buildings alongside the principal spine of Columbus, Ohio, all built on a bridge over a freeway. It is a marvelous example of a place connector, one that seamlessly unites two emerging neighborhoods to one another.

However, these caps aren’t exactly something that can be replicated everywhere, since it’s an incredibly expensive way to fix a place. The Columbus example was funded by the federal government, as a mitigation measure for widening the freeway below. Most other recent cap proposals resulted from similar mitigation measures — and thus most are parks, both because that’s what the government builds and because their relatively light weight keeps the cost of building a deck down. Klyde Warren Park in Dallas is one example; 70% of the money came from the federal and state governments.

Three things to keep in mind when evaluating a freeway cap:

The future site of Capitol Crossing, on a rare car-free day (Inauguration Day 2009). Photo by Bossi, via Flickr.

1. The price of the structure is only justifiable if you’re surrounded by very high-value land — namely, a high-rise, high-rent CBD of a high-cost city. This limits the situations where these caps make economic sense to premier sites. For instance, a few blocks of air rights over the Massachusetts Turnpike in Boston’s Back Bay are currently in the planning/proposal phase, having seen prior plans fall apart during the Great Recession.

Capitol Crossing’s developers paid the District $60 million for air rights and are sinking another $400 million into constructing a platform over I-395 just east of Union Station, yielding a cost per “FAR-foot” (square foot of potential development) of around $150-200. That’s substantially higher than the $75 per FAR-foot seen in recent transactions for development sites at the periphery of downtown — but comparable to the $190 per FAR-foot paid for “dirt” within downtown DC, which is pretty much extinct. The net result of this scarcity and high prices is that only the very highest value land uses, namely office and retail, are economically feasible at this development — residential just doesn’t pay enough.

The economic feasibility line might also be teased out from the RFI responses that Virginia DOT received regarding two sites over I-66 in Arlington — one at the edge of Rosslyn’s high-rise core, and another in low-rise East Falls Church (actually within Arlington County). Almost none of the responses deemed the EFC parcel economically feasible, but many of the responses indicated that the effective “land cost” for the Rosslyn parcels, including cost of construction, at nearly $100 per square foot of FAR.

Unlike private development, a park’s feasible land value is set off-market and is thus completely subjective. In a neighborhood in dire need of a park, or on an irreplaceable waterfront site, the value of a new park may indeed justify the cost of construction.

2. It’ll be much easier, and cheaper, to build a cap if the freeway is completely closed for a while — say, for a major reconstruction. Staging construction over an operating freeway is risky, dangerous, and ultimately costly. Hence, many existing freeway-lid projects, like the Prudential Center and Copley Place in Boston, were constructed before the road underneath them opened to the public. Columbus’ lid was built during an 18-month closure of I-670, for example.

Even at Capitol Crossing, the developer realized the folly of trying to keep the freeway open during construction, and proposed to close 395 entirely for 15-18 months. The closure eventually came to naught due to politics, but would have “cut in half the construction time,” according to the Post: “Building the deck requires installing about 150 caissons along the median to support a network of steel girders… installing the caissons while the highway is in use would be hazardous and disturb nearby residents.”

3. A more entrepreneurial approach that governments can take to such a project is suggested by Matthew Kiefer, who worked on an earlier iteration of the MassPike deal:

MassDOT should adjust its expectations about the revenue potential of these difficult sites to reflect economic reality. It should rely more on rent derived from the net profit of a stabilized real estate asset – percentage rent or a share of proceeds of future sales or refinancings – and less on initial land value, which can be illusory. The Commonwealth will be around for a long time to realize patient returns.

In this PPP structure, the state “speculatively” builds the platform, then executes a “ground lease” for the air rights while keeping the property under state control. This may require a more entrepreneurial attitude towards monetization than most state DOTs are willing to take, but well-located center-city land is a great long term investment. If you really believe in the quality and long-term value of the place that you’re creating, a percentage-rent ground lease is a great way to discount the rent up front but to participate in the long-term gains.

4. There are lower-cost alternative to a full bridging project while minimizing the freeway’s footprint and impact. In many cases, the most expensive bit will be bridging the through-traffic lanes — but even sunken urban freeways usually have lots of other spaces. Embankments are usually excessive, and building platforms can be cantilevered out over their edges. Lower-traffic ramps and shoulders are easier to close temporarily for construction. Skybridges can be assembled off-site rather than in-situ, providing more connectivity across the site while minimizing closures of through lanes.

ULI sponsored a governors’ advisory panel study about another downtown Boston air rights parcel in 2012; it recommended a lighter approach than a full-on deck, with buildings surrounding the interchange and bridges over it. (Ironically, the parcel was created through the Big Dig project!)

5. Railroad air rights have also seen active development in recent years, e.g., Hudson Yards in NYC, River Point in Chicago, and 30th Street Yards in Philadelphia. However, the costs aren’t truly comparable to freeway decks: the column spacing can be much closer for railroads than for freeways, and the vehicle movements are rather more predictable.