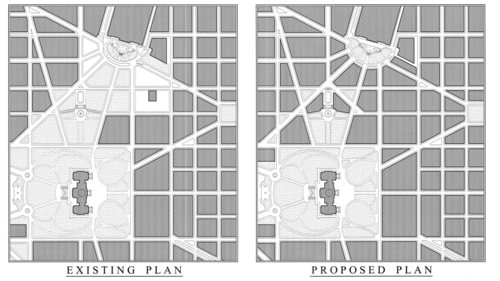 Dan Morales’ proposal to fill the parking crater between Union Station and the Capitol complex.

Dan Morales recently shared some renderings on GGWash of what new buildings fronting Columbus Circle (the plaza in front of Union Station) might look like. The site is now mostly Senate-staffer parking, which has long annoyed the local chattering classes. The Capitol parking lots are, after all, the very last parking crater to mar the otherwise continuous urban fabric of central DC, and they sit right in front of heavily used Union Station.

It’s not that the Architect of the Capitol (AOC) particularly loves its surface parking. After all, they commissioned WRT to do a lovingly rendered plan to eliminate not just all of the surface lots, but even many of the surface roadways (ahem, I-395) on the House side. Instead of surface parking and unlovely parks, the 2050 plan shows more office buildings, with parking relocated to new standalone garages over/next to I-395. (A prime motivation is to eliminate the parking beneath office buildings, now considered a security hazard.) In short, AOC’s been land-banking the entire Hill in the assumption that its space needs will grow in the future.

Yet new planning efforts might identify that offices and support facilities continue to get more space-efficient, and that some of the land may be surplus to even the longest-term planning horizon. And, well, commercial prices are really rich…

@alex_block @paytonchung I’m sure AOC could come up with something to spend $100M on, or whatever the rights to those blocks are worth.

Those numbers piqued my interest. Let’s see, clockwise around Columbus Circle NE, the parking lots are:

The blocks to the west are zoned C-3-C, with a maximum FAR of 6.5. That would fit underneath the 80′ height maximum applied to Columbus Circle under the Height of Buildings Act. Thus, a maximum of 1.5 million square feet of office could be built on all four parcels, or 1.16 million on the three parking lots. Based on a land value of $200 per FAR-foot for offices in downtown DC, that’s $300 million for all four parcels, or $231.7 million for just the parking lots.

That value’s substantially higher than the $350 million that Lydia DePillis calculated as the value of all AOC’s surface parking, using tax valuations (which often lag market values).

How could a deal be structured? GSA, under the leadership of Dan Tangherlini, started dealing in “swap-construct exchanges” for sites like Federal Triangle South. In that arrangement, a developer builds a new building for GSA, which in turn “pays” the developer by granting title to surplus property. Maybe AOC could pay for further renovations, for removing its existing subterranean garages, or for new standalone parking garages (perhaps on the block between 1/2/C/D that houses the Monocle and the Capitol Police) with the revenue.

All of those sums sound like a lot of money. However, AOC projects do tend to be pricey: even $300 million is only half of the unfunded cost of Cannon House Office Building renovations. At least AOC would be able to get the money without enduring the wrath of its occupants, who sometimes point fingers at AOC’s spending.

So, Dan, now that you’re in the private sector, how about an unsolicited proposal to AOC?

2 thoughts on “Infilling Columbus Circle: What’s it worth?”